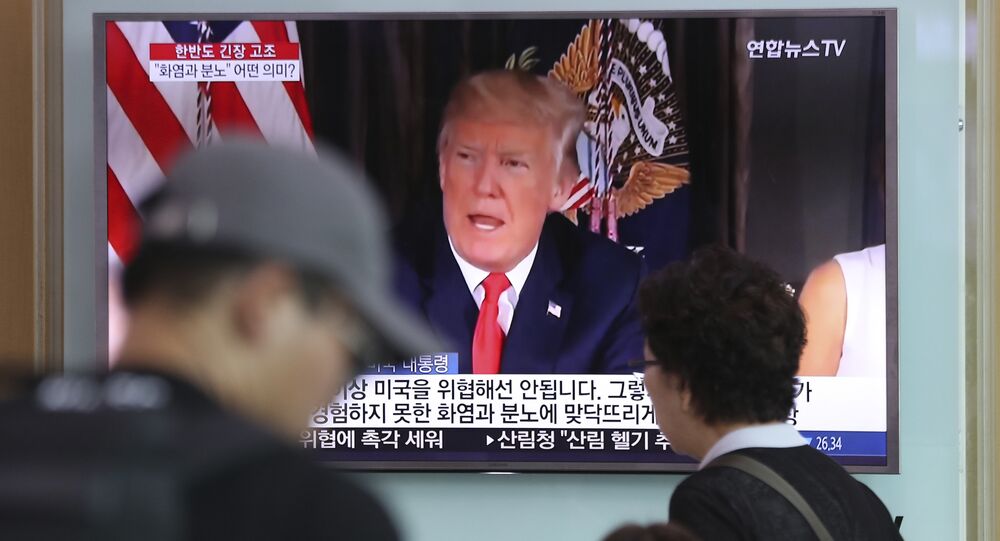 US President Donald Trump will accept the offer from North Korean leader Kim Jong-un to meet for the first time ever, according to the White House. However, US economic and military pressure on North Korea will remain in place.

The time and place for the meeting between the two firebrand leaders has yet to be determined. US authorities have made it clear that they will accept nothing less than the total denuclearization of North Korea to end the ongoing crisis.

"President Trump greatly appreciates the nice words of the South Korean delegation and President Moon [Jae-in]. He will accept the invitation to meet with Kim Jong-un at a place and time to be determined. We look forward to the denuclearization of North Korea. In the meantime, all sanctions and maximum pressure must remain," said White House press secretary Sarah Huckabee Sanders in a statement.

On Thursday, South Korean National Security Adviser Chung Eui-yong announced at the White House that Kim is willing to meet with Trump "as soon as possible." Until then, Chung added, Kim is willing to "refrain from any further nuclear or missile tests."

​"I told President Trump that at our meeting [in Pyongyang] North Korean leader Kim Jong-un said he's committed to denuclearization." Chung added that North Korea said they would have "no reason to possess nuclear weapons in in the absence of military threats to the DPRK and guarantees for the security of the North Korean regime."

The crisis began in April, when the US deployed an aircraft carrier to the Korean Peninsula in response to North Korea testing a medium-range ballistic missile. The country tested at least one missile a month from April to September, skipped October and tested again in November. However, since then there has not been another North Korean nuclear test in almost three months: the longest pause since 2016.

Although bellicose rhetoric has been thrown around from both nations, with North Korea threatening to attack the US Pacific territory of Guam while Trump vowed to meet North Korean aggression with "fire and fury," talks have been in the air for months now. The US has poured pressure onto the North, championing punishing UN economic sanctions and conducting large-scale military exercises alongside Japan and South Korea.

However, annual exercises that would have occurred in January or February were postponed by the US and South Korea because of the Winter Olympics and Paralympics in Pyeongchang, South Korea.