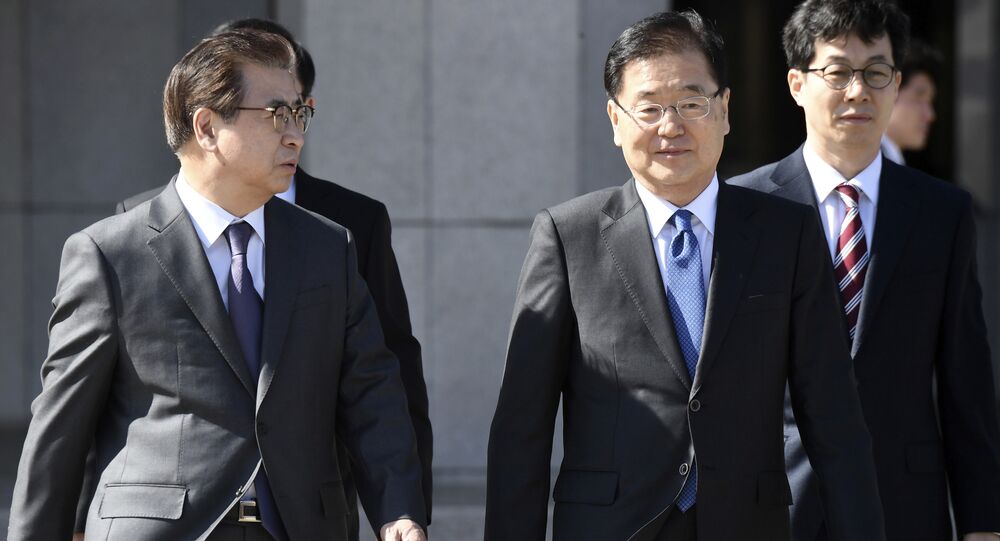 Chung Eui-yong, the head of the South Korean National Security Office will visit the United States this week, to brief officials on details of his trip to North Korea which according to him contained an undisclosed message from the communist state.

The North Korean has leader clearly declared his country's readiness for dialogue with Washington, and confirmed the North is willing to put the denuclearization issue on the dialogue table with the US, Chung Eui-yong, South Korean President Moon Jae-in's top security adviser said in a press conference.

Seoul's envoy will embark on a two-day trip to Washington on Thursday, after a two-day visit to Pyongyang that ended Tuesday, during which he and four other special envoys of Moon held breakthrough talks with Kim Jong-un.

"We cannot reveal everything to the media but we do have additional views of North Korea we will relay to the United States when we visit the US," he told reporters.

Chung Eui-yong assured the public that the main purpose of his trip to the North was to persuade the North to talk with the US.

"From looking at the news or Twitter, I believe President Trump is positive about the results of the North Korea visit (by South Korean officials). However, as this is just the beginning, I believe we are not yet in a situation where we can be optimistic," President Moon told political party leaders.

More cross-border exchanges are assumed between the two Koreas as they prepare for a summit between the North's Kim and South's President Moon Jae-in next month.

Moon has repeatedly underscored the importance of the latest improvement in inter-Korean relations, calling it a hard-earned and possibly the last chance to restart multilateral negotiations on ending the North's nuclear ambition.

Relations between the two Koreas have softened in recent months, with the states renewing talks and the North sending its athletes and a delegation to the 2018 Pyeongchang Winter Olympics in South Korea, where their national teams marched together under a "unification flag" in the opening ceremony.