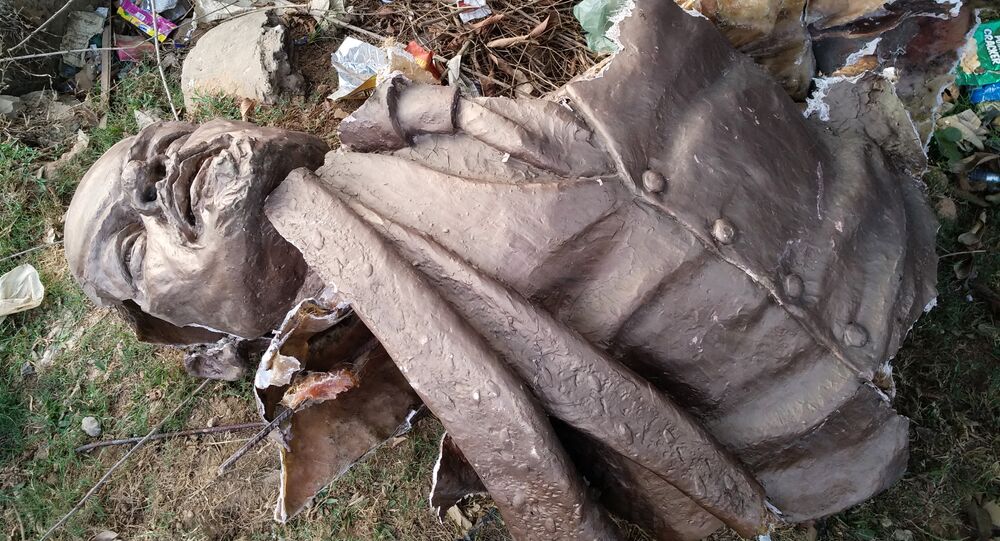 Days after the right-wing Bharatiya Janata Party (BJP) dislodged the communist government of 25 years in India's northeastern state of Tripura, hundreds of people, allegedly backed by the BJP, gathered at a square in the town of Belonia and vandalized a statue of the former Soviet leader Lenin.

New Delhi (Sputnik) — The statue was erected at the Belonia town square by the Communist Party of India (Marxist) five years ago. But as the Bharatiya Janata Party (BJP) took charge of the state's administration after winning a landslide victory in the recently held state assembly elections, supporters drove in an excavator and reduced the statue to rubble. BJP supporters reportedly also ransacked the properties of the Communist Party of India (Marxist)  across the state.

The BJP claimed that the statue was demolished by the common people of Tripura who were fed up with the bad governance of the left parties.

"People of the area wanted to erect statues of national heroes like Swami Vivekananda, Sardar Vallabhbhai Patel, and Mother Teresa instead of Lenin since long. Whatever happened in Belonia is the outcome of public fury," Subrata Chakraborty, spokesperson, BJP claimed.

However, the CPI (M) accused the BJP and its alliance partner — the Indigenous People's Front of Tripura (IPFT) — of inciting violence in the state to serve their vested interests.

"Attacks in #Tripura are now being coordinated in a centralized way by BJP-IPFT leadership. Left got 45% vote. BJP-IPFT wants to use their newly acquired power to smash that support base thru physical attacks, torching of offices, intimidation & bullying," the party said in a tweet.

Attacks in #Tripura are now being coordinated in a centralized way by BJP-IPFT leadership. Left got 45% vote. BJP-IPFT wants to use their newly acquired power to smash that support base thru physical attacks, torching of offices, intimidation & bullying.#StandByTripuraLeft pic.twitter.com/dcXq1l2ow0

By the CPI (M) state secretary Bijan Dhar's estimates, some 514 party workers and supporters were injured in more than 1000 incidents of violence in which 196 houses and 64 party offices were vandalized.

Meanwhile, police have arrested the driver of the excavator which was used to demolish the statue. The local administration has also imposed Section 144, which prohibits the assembly of more than five people.

"We have arrested the driver and seized the bulldozer last evening," South Tripura superintendent of police Manchak Ipper said on Tuesday.

The BJP has also indicated a massive change in the state's education policy by removing references to the Russian and French revolutions from school textbooks.

"The education policy will change totally. National leaders' histories that are missing in school syllabus would be introduced. There would a small chapter on the Marxist rulers too," Sunil Deodhar, BJP state in-charge said.

Why does a poor country like India need a statue of a foreign leader like Lenin anyway, when millions of children are starving? Why can't we build a primary school instead? #tweetlikeafiberal

So much weeping and wailing over the toppling of Lenin’s statue in Tripura. More proof that Indian communists need to get out of their time warp. The Soviet Union no longer exists and China now has a market economy.