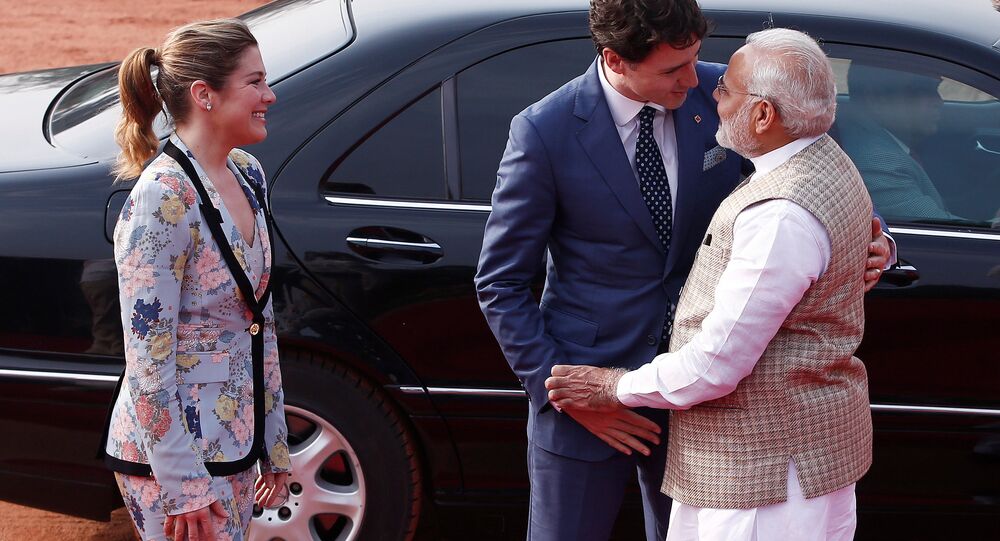 New Delhi (Sputnik): A seven day trip, mired in controversy, of Canadian Prime Minister Justin Trudeau to India, has finally ended with an all-important trademark bear hug of the Indian Prime Minister Narendra Modi on Friday. Following the bilateral talks, the two leaders have vowed to fight terrorism and any kind of violent extremism. Discussing the possibility of expanding trade links, Trudeau described India as "a natural partner and a trusted friend for commercial cooperation."

At the ceremonial welcome for Canadian PM @JustinTrudeau in Delhi this morning. pic.twitter.com/KF5E9cqm4m

​Reciprocating the enthusiasm showed by the visiting Canadian Prime Minister who visited a temple, mosque, and Gurudwara in the last six days in several parts of India, Indian Prime Minister Modi too underscored the links between the two countries.

Great to see Prime Minister @narendramodi again today in Delhi. Thank you for the warm welcome & productive talks on how Canada & India will collaborate more closely, creating more jobs and opportunities for people in both our countries. pic.twitter.com/HqmhMNk4W5

"India has attached a high importance to pursuing its strategic partnership with Canada. Our ties are based on democracy, pluralism, the supremacy of law and the mutual interaction," Modi said during a joint press conference.

"Terrorism is a threat to countries like ours and to fight these elements it is important for us to come together," Modi added.

The Canadian Prime Minister's visit to India has been attracting bad press ever since he landed in New Delhi six days ago. First, the Indian media drew the public's attention to the unenthusiastic welcome Trudeau was accorded by the Indian Prime Minister who did not meet him once in the first five days of his visit. Second, a photograph of Trudeau's wife with a designated terrorist stirred a huge controversy with the Indian government announcing a probe into the matter.

Jaspal Atwal was found guilty of attempted murder in 1986 after shooting a Punjab state minister who was visiting Vancouver Island. Atwal lives in Canada, but travelled to India and attended a government function last night.

​On Thursday, it was revealed that a militant Sikh separatist convicted of attempting to murder an Indian politician in Canada had been invited to dine with Trudeau at the Canadian High Commissioner's residence in New Delhi. However, following the controversy, the official invitation was rescinded.

Dear PM @JustinTrudeau — next time you come visiting could you please —leave the terrorist- (and the wedding Kurtas) at home.

My column in @washingtonpost on how why I went from a one-time Fan to Oh, No, Enough Already!-on Trudeau https://t.co/3lp7jPCLYI

The photo generating the controversy was that of Jaspal Atwal, one among the Sikh separatist leaders, many of whom are now settled in Canada. They have been waging a movement from within India and abroad demanding a separate nation for the Sikh community. During the joint press conference, Modi did not make any explicit reference to the Khalistan movement but made it clear that India would not tolerate any complicity.

"There should be no space for those who seek to divide communities and promote separatism. We will not tolerate those who challenge unity and integrity of our countries," Indian Prime Minister added.

Apart from extremism issues, the two leaders agreed to expand the ongoing mutually-beneficial civil nuclear cooperation by developing collaboration in nuclear science and technology. In the defense sector, both the countries have agreed to explore the possibilities of cooperation in diverse fields including cold climate training, enhancing naval interactions, and staff exchanges.

Watchdog: Justin Trudeau Is Under Scrutiny Over Alleged Ethics Violations