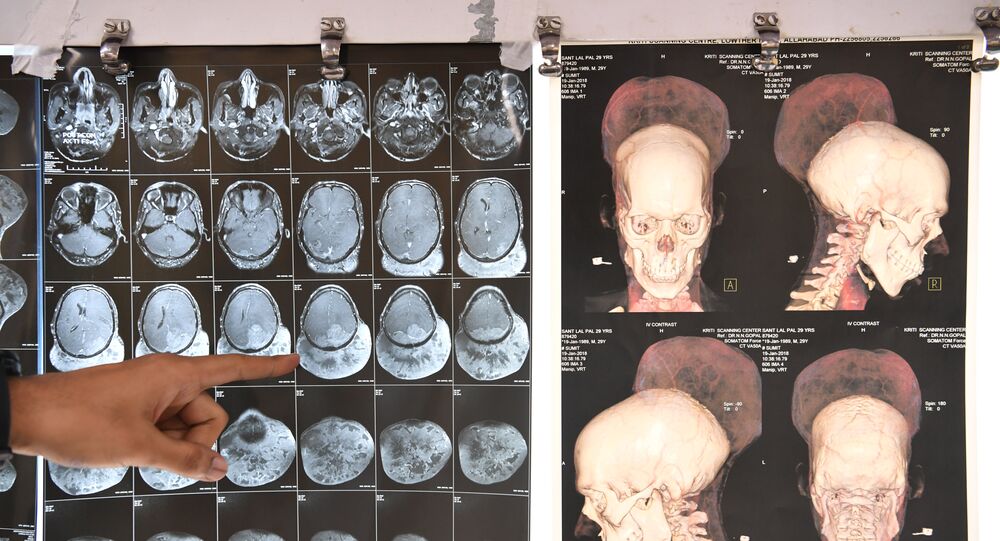 The tumor protruded from the skull of 31-year-old Santlal Pal who became blind due to the tumor. It took seven hours for a team of surgeons to perform the medical feat. Two other big hospitals had refused to operate upon the Santlal due to the heavy risks involved in such surgery.

New Delhi (Sputnik): A group of Indian surgeons has claimed to have successfully removed a huge brain tumor — the largest recorded in medical history — from a patient in a Mumbai hospital. The intricate operation was performed at the civic body run BYL Nair Hospital by a team led by Dr. Trimurti Nadkarni.

As per reports, the patient Santlal Pal, a native of the northern province of Uttar Pradesh and was brought to Mumbai after hospitals in Varanasi and Allahabad refused to treat him because of the complexities involved in the procedure. Pal had heavy swelling under the scalp and was rendered blind and complained of a persistent headache and surgery was the only option.

"It appeared as if there are two heads mounted on top of each other. Even the scalp vessels had become tortuous and dilated. At the time of admission, the patient was completely blind," Dr. Trimurti Nadkarni was quoted as saying by local media.

The patient and his relatives were informed about the risk involved in performing the surgery. The tumor was removed during a 7-hour surgery on February 14. The patient needed 11 units of blood and was kept on ventilator three days after the surgery, he added.

"Such tumors are rare and are a surgical challenge owing to blood loss. Managing the patient requires great team skill and intensive preoperative monitoring for a successful result. The patient has recovered well and is on a full diet. He feels relieved of a large burden on his head, "Dr. Ramesh Bharmal, Dean of BYL Nair Hospital told the Hospital Hindustan Times.