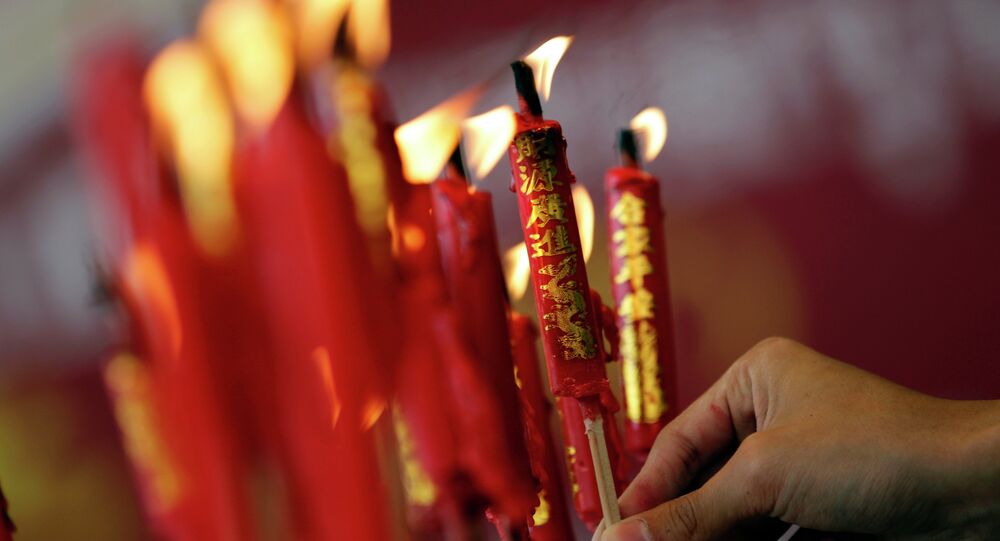 As the Chinese New Year kicks in, we look at some of the traditions associated with the holiday. A whole two weeks are set aside to celebrate, and here’s a couple of thoughts on how to do it right.

This New Year, the Year of the Dog, has just begun, according to the Chinese astrological calendar; according to ancient tradition, the celebration will continue for two weeks, so we helpfully provide a brief insight to understand some of the customs associated with the festivities.

Unlike the Western New Year, the Chinese New Year — also called "Lunar New Year" — depends on the lunar calendar, so the exact day on which the festivities begin is calculated anew each year. This year, it was February 16th, but next year it will be February 5th. While some Chinese communities continue New Year festivities for 15 days, others have even longer holidays, although business usually returns to a more or less normal schedule by the fourth day.

© Sputnik / Vin Sharma
Twitterati Puts on the Dog as Chinese Lunar New Year Kicks Off
The Chinese New Year boasts an elaborate timetable for the festivities, with particular activities traditionally assigned for each day. For example, on the second day, married women visit their birth parents, and paper offerings are burnt. Those willing to spend the upcoming days in accordance to Chinese traditions can find an extended description of the timeline here at Travel China Guide.

There are some features that unite them all, though.

Or course, the first is the color red, and it has nothing to do with communism, because we checked and we would know. As one can easily guess, such a bright color is intended to scare away evil spirits; everything is red during new year festivities: clothing, decorations, firecrackers, etc. Other bright colors are welcome, but there are two that must be avoided: white and black, as they are associated with funerals and grief.

The famous Chinese firecrackers are also used to scare away evil spirits. Feel free to launch fireworks, and do it a lot. Due to some unfortunate fireworks-related incidents, China had to impose a ban on some fireworks in urban areas back in 1990s, only to lift the ban circa 2005. However, in many Asian countries, fireworks in urban areas remain banned for the exact same reasons — but in many cases, this ban is effectively looked down upon, because tradition.

Many Chinese traditions are based on homonymic words, according to the South China Morning Post (SCMP), and many foods are chosen for the festivities simply because they sound like something good, happy and lucky. For example, in Chinese, ‘fish' and ‘surplus' sound very similar,  therefore fish is absolutely necessary on the Chinese New Year table. And don't think that (hopefully red) fish is simply there to eat, because there are a number of customs connected: one should avoid turning the fish over, as it symbolizes a capsized boat. You must also leave some of the fish untouched, as it symbolizes abundance.

Similarly, if a bit curiously, Chinese adherents to the tradition avoid buying books and newspapers during the holidays, simply because ‘book' and ‘lose' sound similar. You can only guess why you should avoid buying new shoes and why it's a must to wash your hair on New Year's Day.

Speaking of cleanliness, if you forgot to sweep your house before February 16, it's certainly not advised to so on the actual New Year Day, as this symbolizes sweeping one's family away. One can say there's good reason for it, too, as what's point of getting all dusty again if you just cleaned yourself up?

During new year celebrations, you certainly must give away gifts but note that, in Chinese tradition, certain gifts are considered to be in poor taste. For example, clocks symbolize a short life; umbrellas represent separation, and mirrors are believed to attract bad spirits. Sharp objects, like knives and scissors, and handkerchiefs are also not an option. (Interestingly, in Russia, giving knives and handkerchiefs is considered bad luck as well, traditionally being avoided by symbolic ‘buying' for just one coin.)

What is always a good gift, of course, is money; and giving money is a special tradition in China, too. In fact, Dr. Ming Wang, an ophthalmologist and advocate for cultural diversity currently based in in Nashville, Tennessee, says the gift of cash is even more common that wrapped gifts which are considered a "western" tradition, according to Live Science.

There are special red envelopes called "lai see" for exactly this purpose. While everyone can give money to everyone, there are customs that say parents should generally give bigger sums of money to children. Married couples can give lai see to single friends and to children of close friends and colleagues.

Also, those inspired by the Chinese New Year are strongly encouraged to visit a market. In China, visiting street markets is part of festive activities, and thus shopkeepers experience a massive influx of customers looking for gifts and flowers. While the Chinese ‘Black Friday' is to be expected before the New Year's Eve, there's little reason to expect that markets will close before the end of second week.

Those seeking a less materialistic and more spiritual experience have a variety of options — from giving offerings to the gods, to simply visiting a Chinese temple. Don't expect it to be too peaceful and quiet, though, as temple fairs are also common, combining performance with more of that shopping for all kinds of goods: from tea to art and calligraphy. Visit China Highlights for a detailed schedule of various temple fairs.

The two weeks of celebrations end with the so-called Lantern Festival, held on 15th day after the new year day. The Lantern Festival is considered the first major feast after New Year's Eve, according to Travel China Guide (as if the two weeks of debauched festivity before that do not count). During the festival, you can watch folk dances, try guessing lantern riddles, or try out Yuanxiao, a dumpling made of glutinous rice, an exclusive food made specifically for this day. But the main attraction is, as the name suggests, the lanterns, lit in huge numbers all across China — originally lit in the name of Buddha. Lanterns come in huge numbers, and all kinds of designs. They're everywhere: in shopping malls, parks, streets and households.

© AP Photo / Joshua Paul
A praying man is silhouetted against traditional Chinese lantern decorations at a temple ahead of the Chinese Lunar New Year in Kuala Lumpur, Malaysia

"Lighting lanterns is a way for people to pray that they will have smooth futures and express their best wishes for their families. Women who want to be pregnant would walk under a hanging lantern praying for a child," China Highlights pointed out.

This is a brief overlooks of Chinese New Year traditions. Enjoy your celebrations, but don't forget to return to your normal daily life after two weeks of festivities, though!

As Kay Tom, a Leicester-based master in feng shui and horoscopes at The Energy Specialist say, "the dog's vulnerability is procrastinate too long and miss that opportunity so be sharp-eyed this year in order to maximise on his own potential."

"Basically, say yes to everything because there is always more depth to what is on the  table in 2018, that is not apparent on first sight," Kay Tom says, according to Daily Mail.

Australia Forced to Do 'Delicate Diplomatic Dance' Between China, US - Analyst