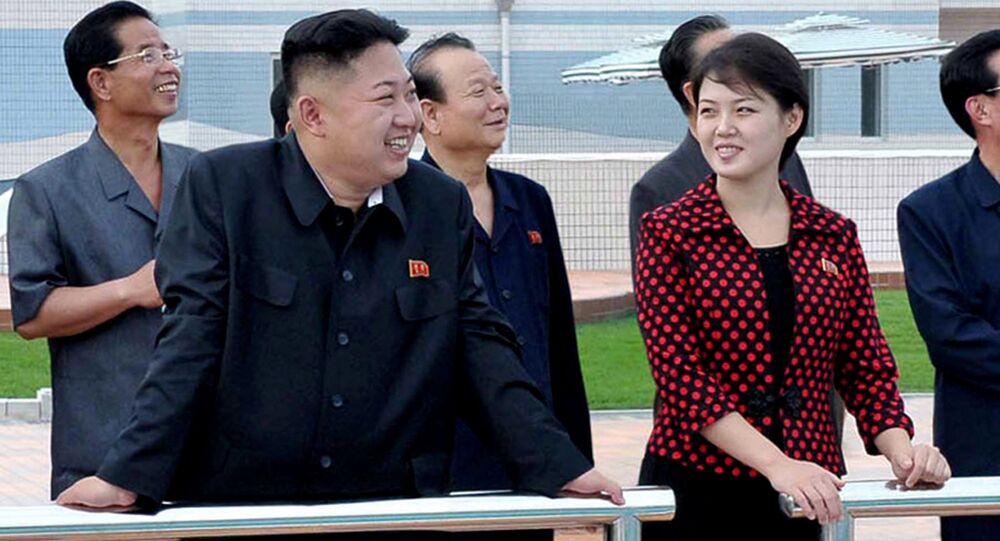 While Kim Jong-un's sister was in the spotlight at the Olympics, another important woman in his life remained with the leader at home. Kim’s wife Ri Sol-Ju is rarely shown to the public, but Sputnik News has gleaned some details about the DPR’s First lady.

This February, Ri Sol-Ju made an impressive appearance as she stood along with her husband greeting a massive military parade in the North Korean capital Pyongyang on the Eve of the Olympic opening ceremony. This was a rare public appearance and the first one for several months, as the country does its best to keep the personal life of Kim’s family a secret. Even his wife’s name Ri Sol-Ju has been reported by South Korean media to be fake.  Yet official sources in North Korea as well as numerous reports from South Korean intelligence services can add some details to the profile of DPRK’s First lady.

"Kim Jong Un, chairman of the Workers' Party of Korea, chairman of the State Affairs Commission of the DPRK and supreme commander of the Korean People's Army, arrived at the square together with Ri Sol Ju." pic.twitter.com/oA7GTCcIIa

North Korea officially introduced its leader’s spouse to the public in July, 2012, as the North Korean Central News Agency identified her as his wife, Comrade Ri Sol-Ju. This was the first time in North Korea’s history the identity of the first lady had been revealed – the spouses of Kim Jong-Un’s father had never appeared in the spotlight. Before the announcement the mysterious lady had been seen along with the Supreme Commander on different occasions, which raised numerous discussions about her identity. However, South Korean intelligence reported that they got married in 2009 while some sources claim they only met at a classical music concert in 2010.

© AFP 2020 / Odd ANDERSEN
N Korean 'First Sister' Returns Home After Sensational Appearance at Olympics
North Korea’s cheerleaders not only made a big splash at the Olympics, a so-called “charm offensive”, but are also said to give the country its first lady. The South Korean media reported citing the intelligence, Comrade Ri was one of 90 cheerleaders sent to the Asian Athletics Championship in South Korea in 2005. The soldiers of this “army of beauties” are claimed to be handpicked for their looks and intelligence after a thorough background. Some sources however identified her as a singer in the Unhasu Orchestra, widely known in NK and abroad, but this also hasn’t been confirmed. Moreover, North Korean officials allegedly destroyed all the footage of her performances, trying to mask her past.

Various sources claim Ri was born between 1985 and 1989 to a University professor and a prominent doctor. She is also reported to be related to high ranking NK officials, this is however not confirmed. Like her husband, she probably graduated from Kim Il-sung University, but some other sources claim, citing South Korean intelligence, she also studied singing in China.

© AP Photo / Ahn Young-joon
‘Very Good Day’: North, South Korean Tensions Eased at Border Meeting
Pictures released by the official state media, Korean Central News Agency, imply the first lady had a taste for luxury brands. She has been spotted with expensive bags and other accessories as well as wearing black or pastel-colored suits of a Chanel style, which differs from how other North Korean ladies have been dressed in public. However, women in North Korea are encouraged to emulate her hairstyle and dressing habits as Foх earlier reported.

The couple is reported to have three children – two girls and a boy. The information about two eldest girls came from Kim Jong-Un’s longtime friend Dennis Rodman, a former NBA player who has visited North Korea several times. He told the media he met the couple's second child in 2013, calling Kim a good dad of a beautiful family. The speculation about a third child rose in 2017 as Ri had disappeared from public view for several months.  South Korean intelligence reported in August that she had given birth to a boy.