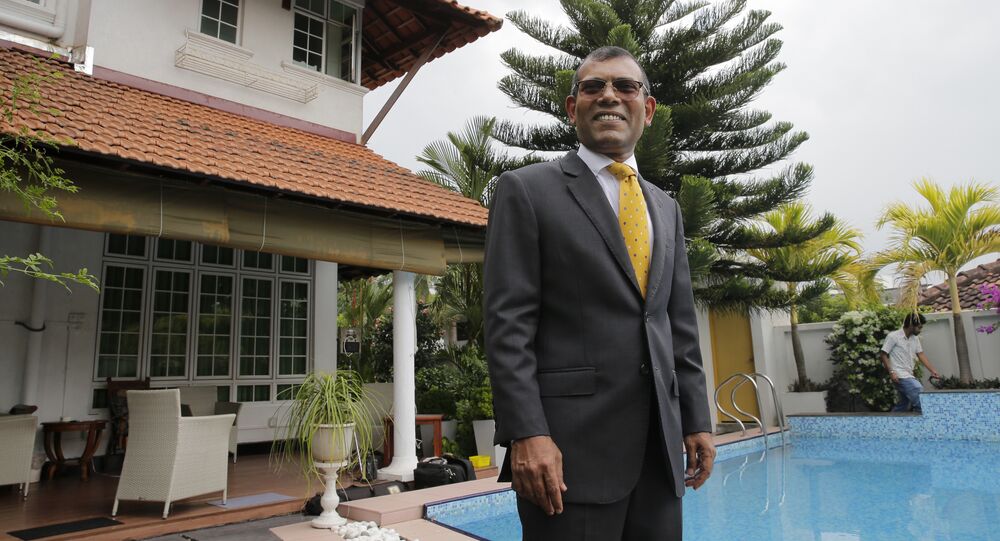 Following the Indian media’s widespread coverage of former Maldivian President Mohamed Nasheed’s allegations that China had a covert agenda behind aiding infrastructure development in the archipelago nation, the Chinese embassy in India issued a statement rejecting Nasheed’s allegations as baseless.

New Delhi (Sputnik): China has rejected claims by former Maldivian President Mohamed Nasheed that Beijing was engaged in "land grabbing" in the island nation. The exiled former President was recently quoted by the "Maldives Independent" as saying that the current government's hapless policies had emboldened a "large emerging power" that was grabbing the land and resources of the strategically important archipelago.

© AP Photo / Mohamed Sharuhaan
Maldives Leader Declares State of Emergency, Ex President Arrested - Reports
China has said these allegations are groundless with no regard to facts.

"In recent years, on the basis of mutual respect, equality and mutual benefit, China and the Maldives have been cooperating on infrastructure and livelihood projects, which has played a positive role in transforming and upgrading the latter's economy and improving its people's livelihood. They have been widely welcomed by the Maldivian people. As a matter of fact, when Nasheed was the president, China and Maldives have already launched relevant cooperation projects. The "land grabbing" allegation by Nasheed is apparently meant to serve certain political purposes of him," Spokesperson of the Chinese Embassy in New Delhi Ji Rong said in a statement on Monday.

The Chinese embassy spokesperson also said that China's only concern for the moment was that no foreign intervention should take place in the Maldives' internal problems.

"China believes the current situation in Maldives is the internal affairs of Maldives and should be properly resolved through dialogue and negotiation by various parties in the country. We believe the Maldivian government and people have the wisdom and ability to properly handle the problems they face and restore order in the country according to law," Ji Rong said.

"It's because a vast majority of our people want India to intervene that I sought India's help," Nasheed told The Hindu in an interview.

The Maldives plunged into a political crisis earlier this month when President Abdulla Yameen launched a massive crackdown on the supporters of exiled former President Mohamed Nasheed who secured a big relief from the judiciary which dropped terror charges against him.