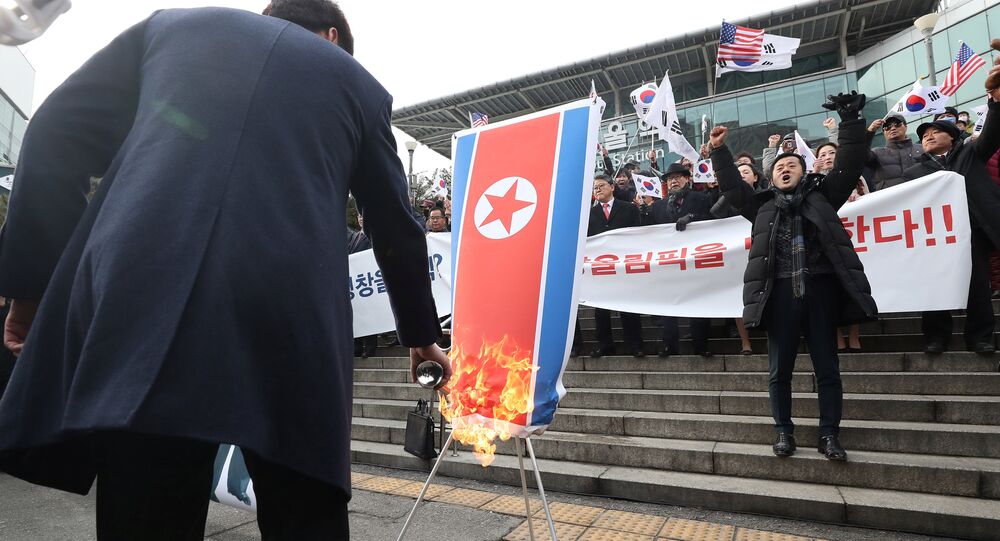 MOSCOW (Sputnik) - About 800 people in Seoul took part in a protest on Saturday against North Korea's participation in the 2018 Olympics in Pyeongchang and arrival of a delegation from Pyongyang, local media reported.

According to the Yonhap news agency, the conservative activists tore photos of Kim Jong-un and tried to burn North Korea's national flags in front of the Deoksu Palace in central Seoul. The protesters also condemned South Korean President Moon Jae-in, who they consider to be too soft on Pyongyang.

READ MORE: And the Winner is…Two Koreas Talk Peace at Olympics in Defiance of US

Earlier in the day, Moon held a meeting with the North Korean delegation headed by North’s ceremonial head of state Kim Yong-nam and the younger sister of the North’s leader, Kim Yo-jong, who had arrived in South Korea to attend the opening ceremony of 2018 Olympics in Pyeongchang.

During the meeting, the sides expressed a common desire to preserve the atmosphere of peace and reconciliation on the Korean peninsula, which started jointly with the Olympics in Pyeongchang, and to intensify cooperation and dialogue between the North and the South.

© Sputnik / Iliya Pitalev
North Korean Leader Invites South Korean President to Pyongyang - Reports
According to media reports, Kim Yo Jong, in particular, delivered an invitation to Moon to visit Pyongyang for a third inter-Korean summit, and the South Korean president reportedly said that he might visit North Korea if "necessary conditions" were created.

The opening ceremony of the XXIII Winter Olympic Games took place at Pyeongchang Olympic Stadium on Friday. The Games will last through February 25.

Participation of North Korea in the Olympics was however in question until Pyongyang and Seoul agreed in January that the two countries’ national teams would march together under a "unification flag" at the opening ceremony.

'A Message to Washington': The Rationale Behind N Korea's Military Parade