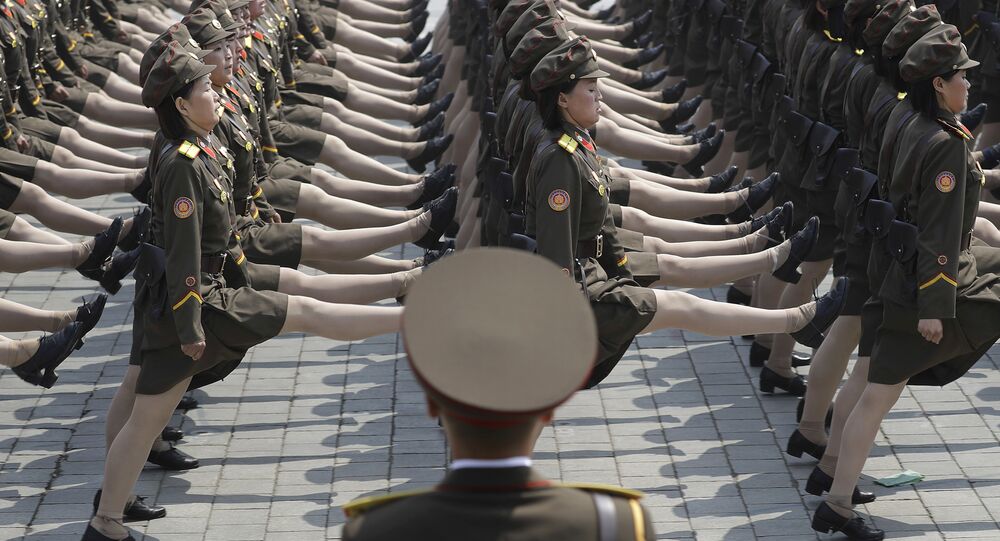 Speaking at a military parade held in Pyongyang to mark the 70th anniversary of armed forces, Kim Jong-un stated that North Korea was a "world-class military power."

Kim, accompanied by his wife Ri Sol Ju, drove up to where the armed forces were lined up and greeted them before heading toward the special platform.

The North Korean leader reportedly told a cheering audience in Kim Il Sung Square: "We… have become capable of showcasing our stature as a world-class military power to the world."

Kim, accompanied by his wife Ri Sol Ju, drove up to where the armed forces were lined up and greeted them before heading toward the special platform.

Unlike the previous parade held in April 2017, North Korean state television did not show the event live, instead airing it hours later.

However, Michael Spavor, one of very few foreigners who attended the parade, managed to take a footage. Spavor known as the person, among other things,  who helped organize NBA star Dennis Rodman's trip to the DPRK and visited Kim Jong-un summer residence with him.

Several different branches of military made their way across the square and then stood in a formation resembling the figures 2.08, for February 8, with a five-pointed star in the middle of a zero.

Portraits of former North Korean leaders Kim Il Sung and Kim Jong Il were held up at the platform.

"At today's parade there will be Hwasong-12, —14 and —15 [rockets].” It can also be expected that an upgraded Pukykson-3 SLBM will be shown, which we previously only saw on the drawings, something similar to an intercontinental ballistic missile (ICBM) with a solid-propellant engine, or completely new Hwasong-13 systems. Although, like last time, they can only be demonstrated in the form of transport-launch containers,” Kim Tonöp, a member of the Center for Far Eastern Studies at the South Korean University of Könnam said.

Earlier, Japanese media reported that the day before the opening ceremony of the Winter Olympics, there a military parade will be held that is timed to the 70th anniversary of the creation of the Korean People's Army.

Usually the military procession, timed to coincide with the anniversary of the establishment of the country's army, is held in April.

In January, the South Korean authorities noticed about 13,000 soldiers and 200 military units near the airport in Pyongyang at an event that looked like a rehearsal for the parade.