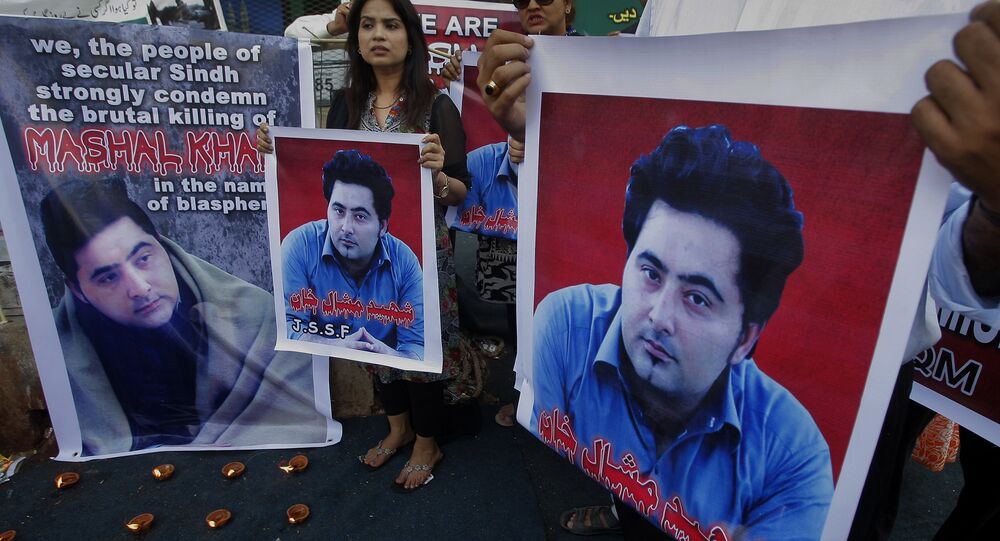 On Wednesday, a Pakistani court sentenced one man to death and handed prison terms to 30 others who were involved in the mob killing of a university student wrongfully accused of blasphemy last year.

The anti-terrorism court in Haripur also announced Wednesday that 26 other suspects were acquitted and three more suspects are still on the loose. One recently arrested suspect has not yet faced trial. The prison terms handed to 30 people ranged from four to 25 years.

In April 2017, a mob, made up of mostly students, lynched 23-year-old Mashal Khan, a journalism student at Abdul Wali Khan University in the northern town of Mardan, west of Pakistan's capital of Islamabad.

Khan was stripped of his clothes, viciously beaten and shot by his fellow students for false allegations that he shared blasphemous content online. A police investigation later revealed that Khan was targeted after he spoke out against the rising school fees caused by what he believed to be nepotism. In June, a police probe into the allegations against Khan revealed that he was innocent of blasphemy.

The lynching attack was caught on video and posted on social media, resulting in widespread condemnation in Pakistan and around the world regarding the country's despotic blasphemy laws, under which insulting Islam or the prophet Muhammad can lead to the death penalty.

After the verdict was announced on Wednesday, Khan's family said they would have to review the verdict before deciding whether to appeal.

"Our legal team is meeting on this and as soon as we reach a decision, we will announce it," Aimal Khan, Mashal's brother, told reporters Wednesday.

"Our demand was that all of the suspects should have been convicted… We ask the [provincial] police to arrest the remaining suspects who are still at large and to bring them to trial," he added.

Twitter Backlash after Pope Steps in to Blasphemy Row