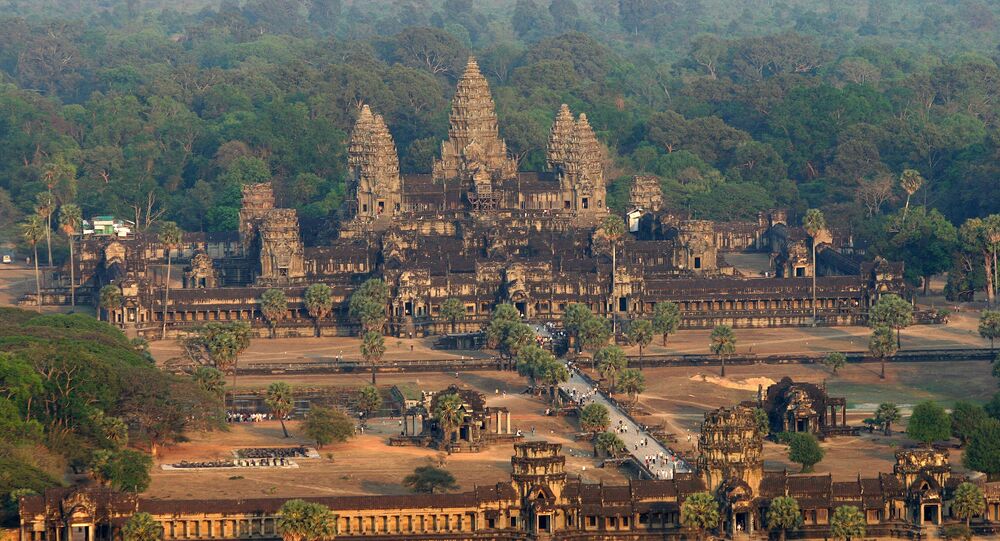 Ten foreigners, including Britons, Canadians, a Dutchman, a Norwegian and a New Zealander, all aged between 19 and 35 years-old, risk a one-year prison sentence for "indecent behavior" in the vicinity of an area considered holy by Cambodians - allegations seen as a warning sign to tourist circles.

Last week's arrest in Siem Reap, a popular Cambodian tourist hub known for its "pub street," sent shockwaves through the globetrotter community. Seventy-seven partygoers were initially lined up by the Cambodian police in arguably the biggest crackdown against indecency in the country known as "the Kingdom of Wonder."

Despite the fact that the ten Westerners currently in custody have issued an apology for their "mistake," they risk up to a year in prison, having been charged with producing pornographic materials after allegedly posing in sexually provocative positions, which was captured on photographs, subsequently released by the Cambodian police.

"They want to go home. They don't want be here anymore," lawyer Sourng Sophea said, as quoted by Norwegian national broadcaster NRK, suggesting an overreaction on the authorities' part. "When the police arrived, they were wearing underwear and bras, while drinking. The accusation that they produced pornography is just too much, as is the fact that they are now in jail," she added.

Vice President of Human Rights Watch in Asia Phil Robertson, who is based in Bangkok and has been working on human rights issues in Cambodia for over 20 years, stressed the significance that Angkor Wat, a ruin of enormous cultural significance for the Cambodian people.

Robertson ventured that the arrest may be a reaction to a spate of similar cases in recent years, in which tourists were caught posing naked in temple ruins considered holy.

In January 2015, a woman posing topless in the Preah Khan Temple in Angkor triggered outrage in Cambodia. The identity of the topless model was never established. The same year, three cases of easy-going foreigners posing "more or less naked" in the temple ruins led to arrests. In late 2017, two Americans were arrested in Bangkok after publishing images of themselves flashing bare behinds in Angkor.

Posing nude has in fact become so common that the Cambodian authorities have set up posters with warnings against "profaning" temples.

According to Richardson, though, the private party that led to the latest arrest, the largest one to date, took place in the city of Siem Reap, which is a few kilometers away from the sacred area of Angkor.

"The youngsters were having fun at a bar, but for some reason or another, the police in Siem Reap chose to arrest them. It feels like a powerful overreaction," Richardson told NRK, stressing that expulsion from the country has been the chosen method so far. He also suggested that that the arrests could inflict serious damage upon the country's important tourism industry, for which the holy temple of Angkor Wat is central.

Over the past several decades, the Angkor area went from receiving several thousand visitors to one of the world's leading tourist destinations, generating billions of dollars in income.

​"I believe that the Cambodian government will eventually realize that it has acted stupidly and will fine the arrested ones and expel them. Based on experience with similar issues, I can see the situation will be resolved within a couple of weeks," Robertson said.

Angkor Wat, originally constructed as a Hindu temple and gradually transformed into a Buddhist one, is among the world's largest religious monuments and has a central place with the Cambodian people. The Angkor Wat Temple is depicted, among other things, on both the country's flags and banknotes.

The Temple of Preah Roup. No other way to climb this but with your hands and feet. #angkorwat #Cambodia #travelphoto #travel pic.twitter.com/lwEfFeFt2b

Did you know that the Cambodian flag is the only flag in the world that features a building? #Cambodia #AngkorWat pic.twitter.com/LETvz6iWtV