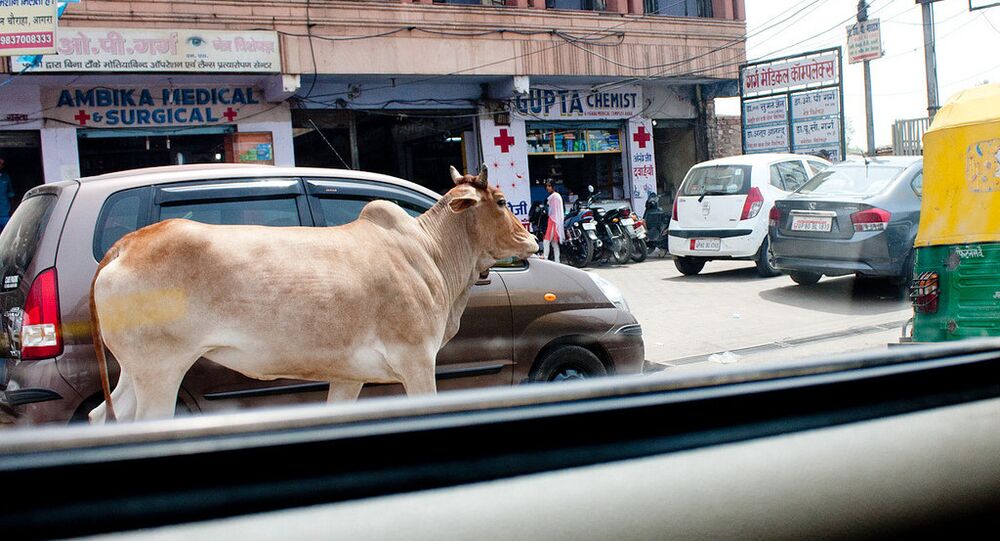 Activists raiding houses and eateries to check for cow meat, and in some cases, lynching those possessing beef, have become a norm in many parts of India where cow meat is banned – a move seen by religious minorities as a sign of the growing power of hardline Hindus since Narendra Modi came to power.

New Delhi (Sputnik) — The political rise of the Hindu right wing in India with the election victory of the Bharatiya Janta Party (BJP) in 2014 has caused proliferation of pro-Hinduism policies and practices in the multi-faith secular state. Protection of cows, considered sacred by the Hindus, continues to be underpinned by vigilantism led by fringe groups that often hound humans in the name of protecting the cow.

The apex court of India on January 29 issued contempt notices to the government of three states for failing to abide by its earlier order calling for the prevention of human rights violation concomitant to cow vigilantism. The recipient of the contempt notice include the northern states of Uttar Pradesh, Rajasthan, and Haryana — all ruled by the BJP. The states will have to reply to the notice by April 3.

Though consumption of cow meat is a taboo among the higher caste Hindus, the norm is not subscribed to by the country's sizeable Muslim community, and the minority Christians and Buddhists as well as the lower-caste Hindus.

However, killing cows is banned in many states of India. Some have recently toughened the ban making even possessing beef illegal.

© AFP 2021 / Chandan Khanna
Chinese Nationals in India in Hot Water for Eating Prohibited Beef
There have been numerous incidences of armed activists raiding houses and eateries for food policing. In most of the BJP-led states, vigilantes are known for erecting checkpoints for raiding trains, buses and other vehicles carrying cattle.

The cow protection unit is a vigilante that punish those who mistreat cows in India. pic.twitter.com/pbV11xLSM2

The most infamous case of cow vigilantism that triggered countrywide shock and awe happened in September 2015 in Dadri village of Uttar Pradesh when the house of an elderly Muslim man Mohamad Akhlaque was raided by a mob who hacked him to death upon discovering meat in his kitchen.

In July 2016 four Dalit men were stripped and beaten for allegedly transporting cows for butchering in Gujarat. In 2017, another Muslim man Pehlu Khan was lynched by vigilantes while he was returning to his hometown of Alwar in Rajasthan after purchasing a cow.

WARNING: The footage can offend sensibilities

Tushar Gandhi, the grandson of Mahatma Gandhi has been at the forefront of a silent movement against the politicization of the cow agenda. In response to a petition filed by Gandhi, the country's apex court in September 2017 had asked 26 states to depute a nodal officer and enhance highway patrol to check violence in the name of cow protection.

However, vigilantism continues unabated in the states of Uttar Pradesh, Haryana, and Rajasthan.

Dalit youths face mob violence from cow vigilantes for allegedly stealing a cow from a temple in Balia,UP. 2 people were allegedly thrashed & their heads partially shaved,faces blackened after which they were paraded across town with placard around neck reading 'I am a cow thief' pic.twitter.com/uLZEix3ajz

This is the result of failure of #BJP to maintain law and order in the State. Since 2014, Rajasthan has become the State of violence either its cow vigilantes violence or Karni Sena, BJP was incapable to handle the situtation. https://t.co/e1a8o1z3yv

Yogi Adityanath, a Hindu cleric, who was appointed the chief minister of Uttar Pradesh in March 2017, has cracked down on slaughterhouses and meat shops, mostly run by Muslims. He said he was shutting down illegal establishments but news reports suggested the crackdown was led by the fringe group Hindu Yuva Vahini, founded by Adityanath in 2002.

We stopped smuggling and slaughtering of cows in illegal slaughter houses. We will also do that in future. This is our resolve. This is an issue of our belief and we will not allow anyone to toy with our belief: UP CM Yogi Adityanath pic.twitter.com/bOvykONh9j

The Haryana government has set up a helpline for citizens to report cow slaughter and smuggling and has even appointed police task forces to respond to the complaints.

The Rajasthan imposed additional taxes for "conservation and propagation of cow and its progeny" in April 2017. The state has had a dedicated department for ensuring the welfare of cows since 2013.

A day after a mob in Indian state of Gujrat lynched a Muslim for the crime of owning a cow, Rajasthan state imposes a tax for cow protection https://t.co/a4K87sbbp1