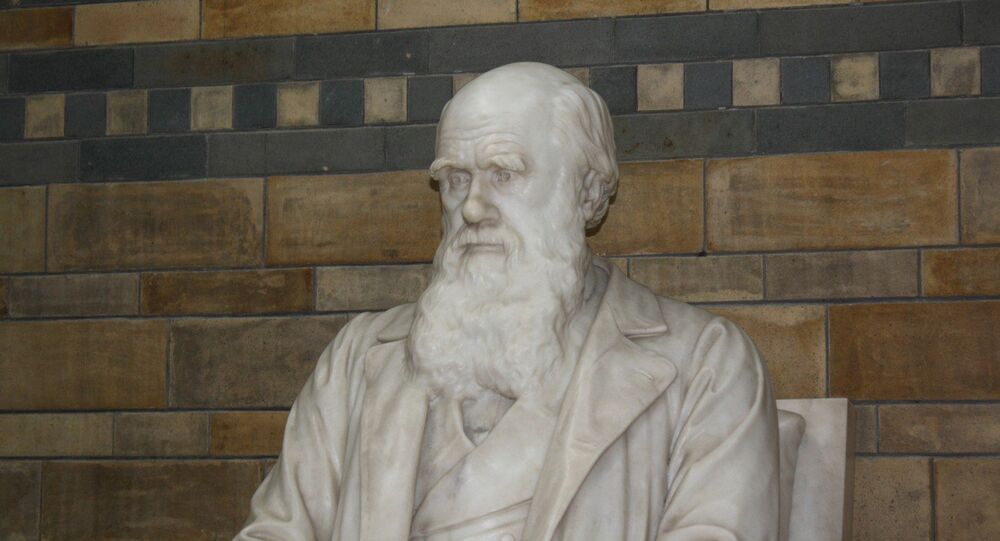 'Nobody Saw an Ape Turning Into Man' – Indian Minister

The online response to this logic, presented by India’s Junior Minister for Education in a flailing attempt to 'debunk' Darwin’s theory of evolution, ranged from rage to satire, mockery and even support. The country’s scientific community has mounted pressure on the minister to retract his statement.

New Delhi (Sputnik) — India's ruling Bharatiya Janta Party (BJP) is facing a stinging indictment that it is waging a war on science after its Junior Minister for Education Satyapal Singh proposed removing Darwin's Theory of Evolution from the textbooks.

"Nobody, including our ancestors, in written or oral, has said they saw an ape turning into a man," Singh said while addressing a conference in Aurangabad, a city in the state of Maharashtra on Friday.

The official was torched on Twitter for his remarks. Comedian Vir Das was at his satirical best.

Guys. I just wanted to let you know Darwin was wrong. No one saw ape turn into man. No evidence. I mean such a huge event and not one selfie taken? That doesn't seem right.

Breaking — Apes join protest against Darwin’s Origin of Species. They deny any involvement in the existence of certain homosapiens.

Meanwhile, the BJP too was not spared by Twitter.

BJP, like almost every other right wing party in the world has an ANTI-SCIENCE agenda because it's very important for them that their supporters remain blind, emotional and logic less.

If anyone becomes a critical thinker, they would lose precious votes and blind supporters

However, despite the severe backlash from all quarters, the minister stuck to his guns.

"I absolutely stand by my comment that Charles Darwin's theory of evolution is not scientific. There is hardly any evidence to substantiate the theory. Great scientists of the world came out to say there is no evidence available in the world which can prove the theory of evolution is correct," the minister said at another conference onMonday at IIT-Guwahati, one of India's top technical institutions.

He even called for an international conference for ascertaining the veracity of the Darwin theory.

"I propose [it], if the Ministry of Human Resource Development is ready to sponsor a world-level international conference to decide what is true and factual and that must be taught in schools and colleges," Satyapal Singh said.

READ MORE: Food Tip for Foreign Tourists: Eat Beef at Your Home Then Come to India

Meanwhile, scientists from across India have started a signature campaign against Minister Singh and his remarks, which they see as an insult to genuine research work. The scientific fraternity intends to deliver the signed petition to the Union Government for asking the Minister to retract his statement. The petition has reportedly garnered over 4,000 signatures and continues to be supported by scientists and academicians from more than 25 of the country's top educational institutions.

Darwinian evolution, as it is taught in the classroom, consists of three suppositions: 1) all living things descend from a common ancestor; 2) the principal mechanisms for the changes giving rise to new species result from mutation and natural selection or "survival of the fittest"; 3) these are unguided, natural processes.

While modern genetic research largely supports Darwin's ideas, they remain a source of controversy, especially among the devoutly religious. Turkey's leadership in 2017 expunged mentions of the English naturalist from its curricula, largely due to its incompatibility with the country's Islamic "values-based education." One of Darwin's most astute critics, the Scottish engineer Fleeming Jenkin has stated in his writings on Darwinism that "a plausible theory (like Darwinism) should not be accepted while unproven; and if the arguments of this essay be admitted, Darwin's theory of the origin of species is not only without sufficient support from evidence, but is proved false by a cumulative proof."

It is the Indian Minister's logic behind the theory that has amazed all.

a theory is open to challenge unless proven as law; Darwin’s theory is the most plausible explanation of evolution but could still be wrong

Also, this is not a one-off event. Leaders of the BJP that runs the Union Government have made frequent arguments to 'prove' that ancient India was a high-tech wonder by debunking popular scientific beliefs. In 2014, Prime Minister Narendra Modi himself got flak for claiming that ancient India was proficient in plastic surgery. He was referring to the religious mythological hero Ganesh, who was fitted with an elephant's head by his father Lord Shiva after he accidentally chopped off his head.

In January 2015, at the 102nd session of the Indian Science Congress, several members of the BJP government led a session on ancient Indian science and claimed that thousands of years ago, Indians had built planes that could fly not just on Earth but between planets.

Indian Minister Threatens to Shoot Target of his Ire, Sets Twitter on Fire