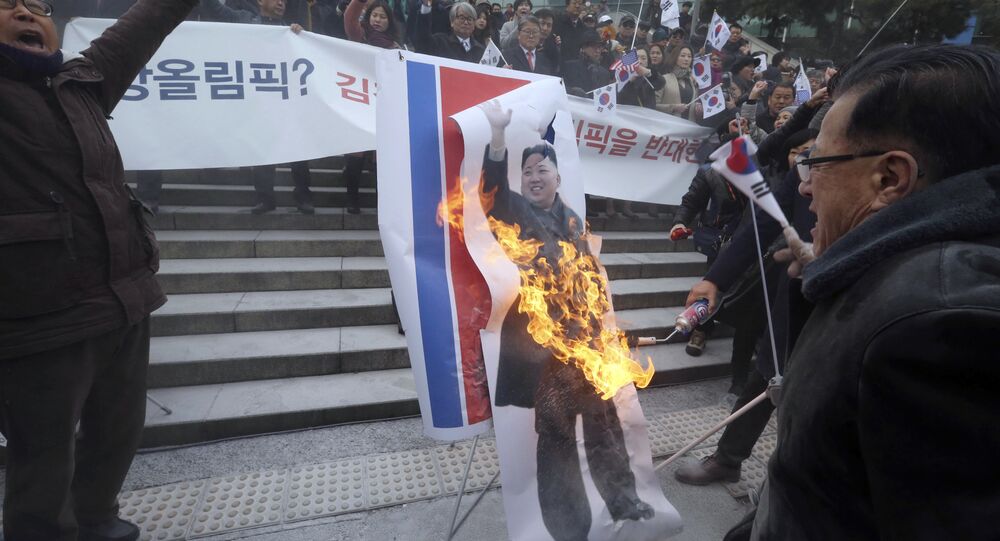 The demonstrators burned North Korean flags and photos of Kim Jong-un near the train station in Seoul, where a delegation from North Korea was scheduled to arrive.

The police intervened, extinguishing the flames. The protest was organized by the Korean Patriotic Party in connection with the arrival of cultural figures, from Pyongyang to Seoul.

"The Olympics in Pyeongchang are actually becoming the Pyongyang Olympics of Kim Jong-un, to propagate the North Korean system and justify North Korean nuclear weapons," the organization's statement read.

Most recently, the IOC President Thomas Bach announced that the committee approved North and South Korea's female ice hockey teams' participation under a unified flag in 2018 Winter Olympics in Pyeongchang, adding that the national teams of both countries would be marching together during the opening ceremony.

However, the decision hasn't been unanimously greeted by the South Koreans, with the members of the country's female hockey team voicing concern over the initiative. The South Korean team’s Canadian head coach, Sarah Murray, told reporters last month that the players were “really nervous.”

In a breakthrough decision, representatives of the DPRK and South Korea agreed on January 9 that North Korean sportsmen, fans and musicians would come to the Olympic Games, and also agreed to the joint training of teams of both countries in one of the ski resorts in North Korea.