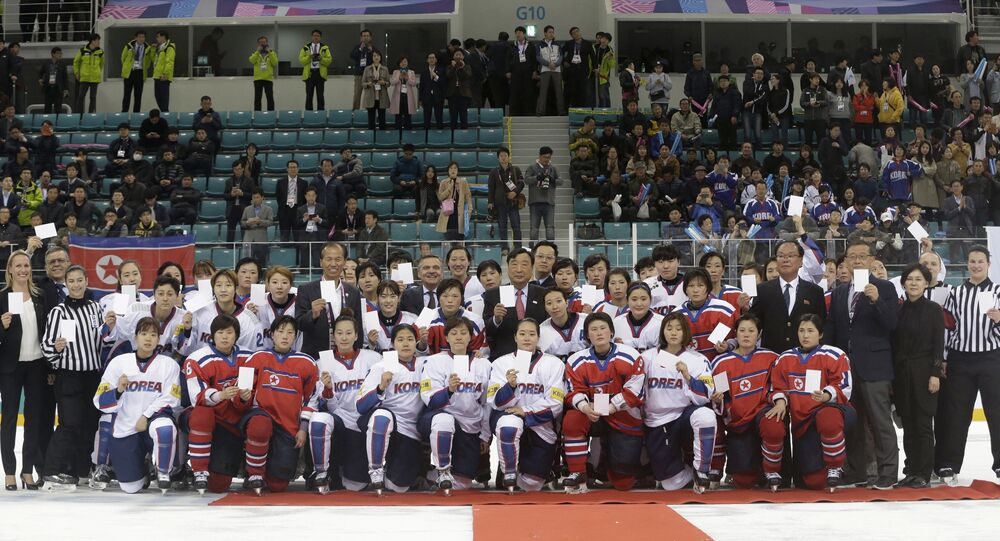 South Korea and North Korea have agreed that their athletes will march together under a "unified Korea" flag at the opening ceremony for the 2018 Winter Olympics in Pyeongchang, Yonhap News Agency reports.

The two Koreas agreed on Wednesday to field a united women's hockey team to perform at the upcoming Winter Olympics in Pyeongchang.

A delegation from Pyongyang will come to South Korea next week to review the facilities at the venue.

During a working meeting in the village of Panmunjom, South and North Korea have announced that their national teams would together make an entrance at the 2018 Olympics opening ceremony under a pro-unification flag.

© Photo : Northrop Grumman
US Bombers, Warships Summoned to Korean Peninsula as Olympic Games Approach
The issues related to the official protocol of the Olympics will be addressed during the meeting of the International Olympic Committee (IOC) in Switzerland's city of Lausanne, scheduled for Saturday.

The news comes after last week North Korea agreed on the participation of its athletes in the upcoming Olympics; additionally it was decided to send a performing squad of about 140 artists to the South Korea.

Amid tensions on the Korean Peninsula over Pyongyang's nuclear program, Seoul seeks to declare the forthcoming event a "peace Olympics."

The 2018 Winter Olympic Games will take place in Pyeongchang, South Korea, and two nearby cities, Gangneung and Jeongseon, from February 9 to February 25. The South Korean resort city is located some 80 kilometers (50 miles) from the the Demilitarized Zone (DMZ) that serves as the border between the two Koreas.