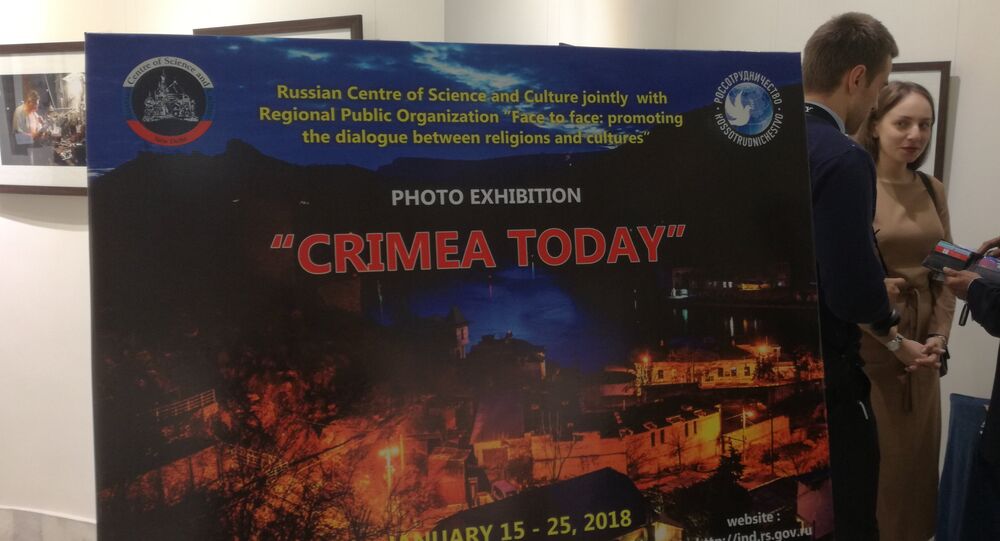 The exhibition is a compilation of 80 pictures captured during the initial years following Crimea’s reunification with Russia.

New Delhi (Sputnik) — The pictures depicting the day to day lives of the people of Crimea captured by photographers form Moscow and Crimea are attracting a large number of visitors in the Indian capital New Delhi, which is hosting the event from 15 to 25 of January. The exhibition titled "Crimea Today" is curated by Rafael Feinberg.

"The objective of the exhibition is to apprise the people on the realistic phenomenon existing in Crimea, and not based on foreign publicity sometimes more unfriendly and untruthful," Fedor Rozovskiy, Director of the Russian Centre of Science & Culture New Delhi said at the inauguration of the exhibition.

Crimea, which was part of Ukraine, conducted a democratic referendum in 2014 which saw the majority of residents supporting the proposal to join the Russian Federation.

Bijendra Singh, Editor (Foreign Affairs), Sahara Samay, one of the first Indian journalists to visit Crimea in 2014 after reunification, was present at the inauguration of the exhibition.

"I visited Crimea on the invitation of its leader Mr. Sergey Aksyonov. The moment I landed in the capital Simferopol, I saw a vibrant Crimea full of life. During my stay, I met several people who were all happy and satisfied with their choice. There was no sign of any chaos as depicted by the western media," Bijendra Singh told Sputnik.

"In fact, I found many cultural similarities and ancient linkages between India and Crimea. There are many opportunities in Crimea for the Indian businessmen to take advantage of. Crimea could even be an excellent destination for Indian film producers as it has beautiful locales and climate. Moreover, the people are nice and friendly," Bijendra Singh added.