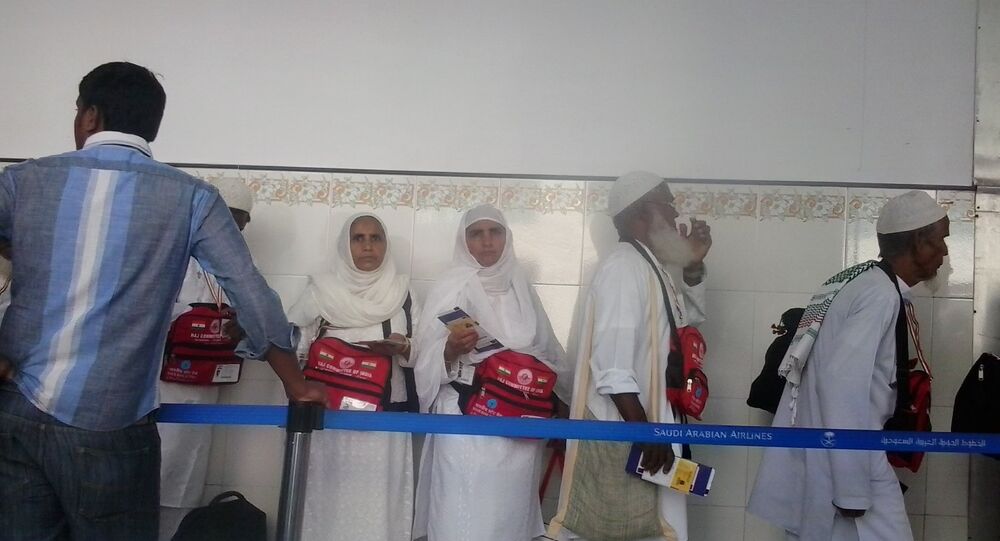 A Muslim scholar who is the prayer leader of India’s second largest Mosque told Sputnik that as taking grants and subsidies for embarking on the pilgrimage is not mentioned in Islam, therefore, the Muslim community is unlikely to oppose the move.

New Delhi (Sputnik) — The government of India has announced the abolition of a Haj subsidy that helped the country's Muslim minority to visit the holy Mecca and Medina in Saudi Arabia without having to pay the exorbitant airfare as well as providing help towards food and medical care.

The Indian government has justified its step by claiming that it would focus on the socio-economic uplift of the Muslim minority rather than appeasing the community with the subsidy for pilgrimage.

"We are in favor of development with dignity. Our government has been working to empower minority through economic, educational, social upliftment with more vigor and honesty. The Haj subsidy will be not available to the Muslim community from 2018," Mukhtar Abbas Naqvi, India's Ministry of Minority Affairs told reporters in New Delhi.

The decision to abolish the Haj subsidy is in consonance with the Apex Court's order in 2012 asking the government to eliminate the Haj subsidy in a phased manner. The scrapping of the subsidy, for now, would mean that this year, pilgrims would have to pay for the flight tickets entirely by themselves while the subsidy on other facilities like accommodation and food will be phased out gradually. The subsidy on flight tickets alone accounted for around $1500 to $2000 per pilgrim.

The Indian government spent nearly $65 million on the air travel subsidy in 2016, according to Minority Affairs Minister Naqvi.

"Haj subsidy funds will be used for educational empowerment of girls and women of the minority community," Naqvi said.

© REUTERS / Ahmad Masood
Iran Will Not Take Part in Haj Pilgrimage Amid Tense Relations With Saudi
Sputnik spoke to Mufti Mukarram Ahmed, the prayer leader of Shahi Masjid Fatehpuri Mosque (Delhi) — India's second largest mosque on this development. Ahmed is of the opinion that scrapping of the subsidy will not have any material bearing on the pilgrimage and that the only concern of the Muslim population is that the Haj Committee that coordinates the annual pilgrimage should not engage in mismanagement or embezzlement of funds deposited by the pilgrims.

"We do not oppose the abolition of the subsidy. Islam does not endorse the concept of grants of any nature for individuals embarking on Haj. But we have little faith in the government's promise that the money saved will be utilized for girl' education and so on because this government puts up a secular face while working against the interest of Muslims," Ahmed told Sputnik.

Meanwhile, the Saudi Arabian government has in principle agreed to allow Haj pilgrims to travel from India via sea route which will be cheaper for the pilgrims. Officials of the two countries will soon sit together to finalize the modalities, Minister Naqvi told the media.

Death Toll in Haj Stampede Near Mecca Rises to 769