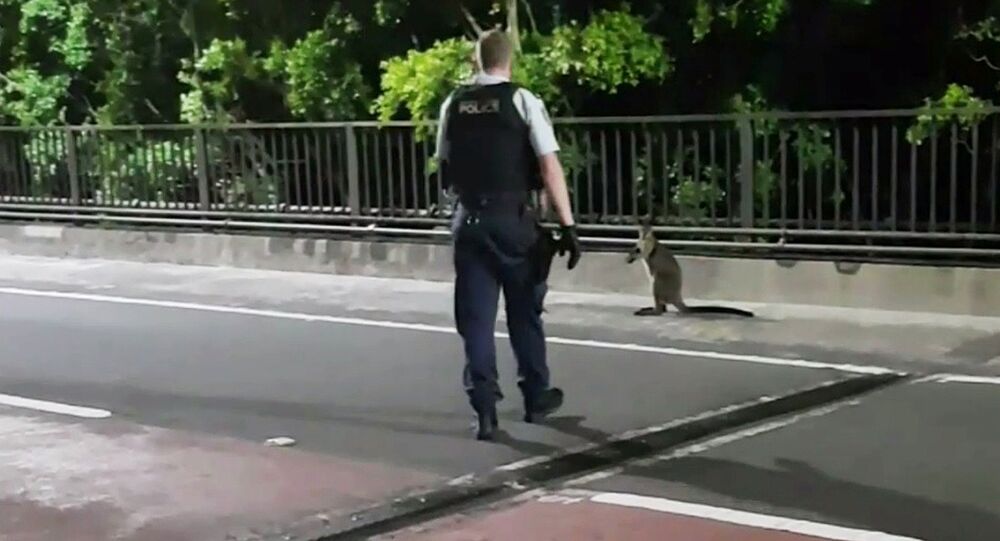 Sydney Police Chase Kangaroo Who Wandered Into the City (VIDEO)

Hopping along the freeway, the mulish marsupial tried to flee police on foot but was nabbed and is now in custody.

It was a typical early morning on January 16 in Sydney, when motorists commuting to work witnessed a peculiar scene — a rock wallaby pursued by police cars with flashing lights.

The adult male kangaroo, an unusual sight in the middle of the busy city, is believed to have somehow found its way there through a golf course, several kilometers away from the northern side of the Harbor Bridge. Stunned drivers who first spotted the creature immediately contacted police.

"When police arrived, the wallaby refused to obey police directions and initially evaded police," one of the inspectors of the New South Wales Police joked.

The officers filmed the curious kangaroo bouncing along the roads before they cornered the animal and wrangled it into a horse float. It was then taken to the wildlife hospital at the nearby Taronga Zoo for a check-up.

Brockport Police Department/facebook
Squirrel Breaks Into a House in the US, Attacks Police Officer
The macropod was lucky it finished its journey before the rush hour, when traffic wasn't very heavy. "There don't seem to be any major injuries," said the veterinarian. However, the wallaby was "quite distressed."

"It's unusual obviously to have a wallaby running around on the Harbor Bridge, but there are more and more of these wallabies turning up in bushland close to the city," he explained to local news outlets.

According to specialists, the kangaroo will be monitored at the hospital's intensive care unit for the next 24-hours and later released back into the wild.

Peace Down Under: Man Breaks Up Brawling Kangaroos

Kangaroo Kickboxing: Greatest Fighters of the Animal Kingdom in Slow-Mo