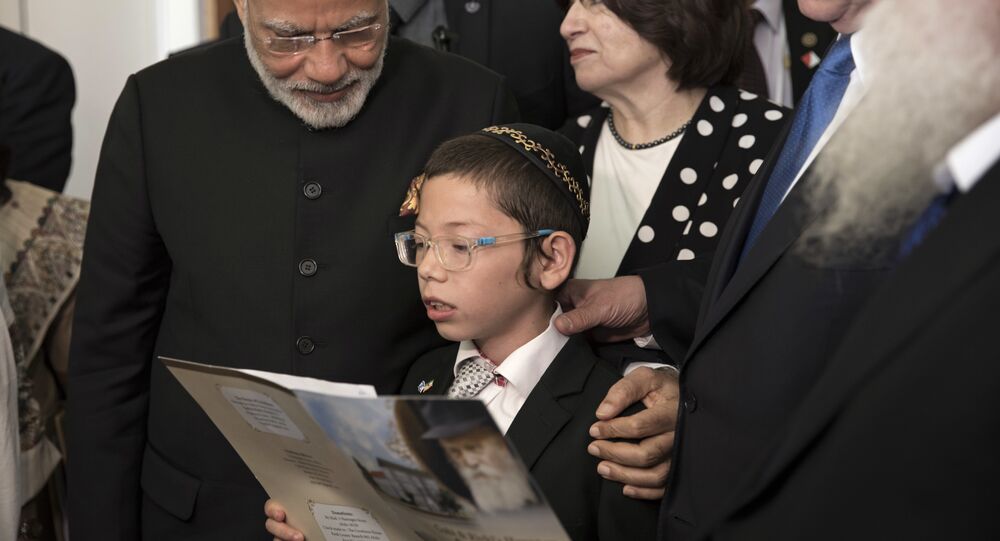 Moshe Holtzberg was two years old when his parents, who ran a Jewish outreach center in Mumbai, were brutally gunned down by terrorists on November 11, 2008. He was found sitting between the blood-soaked bodies of his dead parents by his Indian nanny.

New Delhi (Sputnik) — A toddler, who left India for Israel in 2008 after witnessing the murder of his parents in a ghastly terror attack that rocked Mumbai in 2008 is in India again and expects to visit the place where his parents lost their lives. Moshe Holtzberg, now 12, reached New Delhi on Sunday as part of the visiting Israeli delegation led by Prime Minister Benjamin Netanyahu.

Baby Moshe to visit Chabad House where his parents were killed in 26/11 https://t.co/fujdWOeKtJ pic.twitter.com/CqN6F1Q4tz

Moshe Holtzberg, who now lives with his grandparents Rabbi Shimon and Yehudit Rosenberg in Israel, was one of the few survivors of the coordinated attacks on different locations across Mumbai by ten members of Lashkar-e-Taiba, an Islamic terrorist organization based in Pakistan. He met with Indian Prime Minister Narendra Modi in Israel last year, who left him an open invitation to visit India any time he wanted.

Prime Minister Benjamin Netanyahu, in his interview with India Today, said that his country would extend every support to India in punishing the perpetrators of the Mumbai terror attack in which 164 people, including at least four Israeli nationals, were killed.

"Ultimately we will catch up with the killers but the objective is also to prevent future killers," Netanyahu said in the interview.

​Moshe's parents Gavriel and Rivka Holtzberg ran the Chabad House, a Jewish outreach center which was one of the targets of the terrorists. Gavriel and Rivka were expecting their second baby when they were brutally gunned down by terrorists, who stormed the building on that fateful day.

Two-year-old Moshe was rescued by his Indian nanny Sandra, who hid in a dingy room to escape the bullets. When she heard a baby cry, she crawled out to see Moshe sitting between the blood-soaked bodies of his dead parents. She swiftly took him in her arms and miraculously snuck out. Moshe and Sandra were later taken to Israel by Moshe's grandparents, who had reached Mumbai as the news of the terror attack reached them.