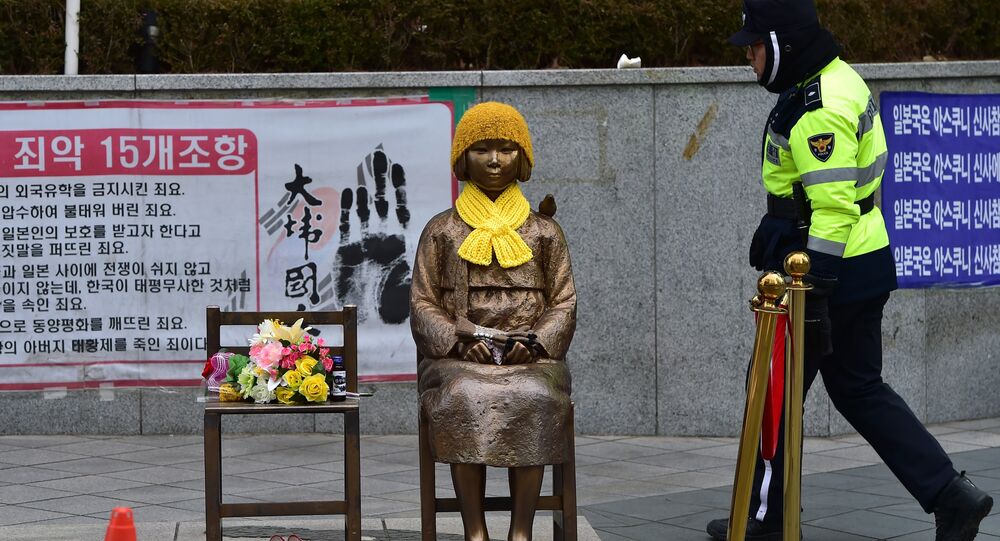 TOKYO (Sputnik) - South Korea does not intend to seek a review of the 2015 agreement with Japan on the issue of the so-called comfort women, who were forced to work in brothels for the Japanese army during World War II, South Korean Foreign Minister Kang Kyung-wha stated on Tuesday.

"It cannot be denied that the 2015 deal was an official agreement reached between the governments of each country, and our government will not demand renegotiation," Kang said at a press conference, as quoted by the Yonhap News Agency.

The minister, however, added that the South Korean government was to allocate money replacing the one billion yen ($9 million) that the Japanese side pledged under the deal in support of the surviving victims and to hold consultations with Tokyo on the fund’s operation in future.

© AFP 2020 / JUNG YEON-JE
South Korean students sit near a statue (C) of a teenage girl symbolizing former "comfort women" who served as sex slaves for Japanese soldiers during World War II, during a weekly anti-Japanese demonstration in front of the Japanese embassy in Seoul (File)
The official also emphasized that Seoul still called on Tokyo to "accept the truth in accordance with universally accepted standards" and continue efforts to recover the victims’ dignity.

Under the deal reached in late December 2015, the Japanese and South Korean sides agreed to "finally and irreversibly" resolve the comfort women issue that has long been a major stumbling block in the two countries’ relations.

In late December 2017, a special task force, launched under South Korean President Moon Jae-in’s office, however, concluded that the previous government had failed to properly take into account the aspirations of the victims of sexual slavery while signing the contentious agreement. The statement prompted speculation about the possibility of the deal’s renegotiation, with a number of the surviving victims have refused to accept money from the Japanese side among claims that Japan's apology was not sincere enough.

Japan has repeatedly spoken against the possible review of the deal pointing out that such attempts would inevitably harm the two countries’ relations, despite South Korea’s "two-track" policy of approaching the historical issue separately from diplomatic and economic relations.