The US Navy’s USS Carl Vinson aircraft carrier is headed for the Western Pacific along with several guided-missile destroyers ahead of North and South Korean talks at the Panmunjom truce village on Tuesday.

The nuclear-powered carrier left its homeport in San Diego last week for the "regularly scheduled deployment," the US Navy said in a Sunday announcement.

"The deployment marks the second time the Carl Vinson Strike Group will operate throughout the Indo-Pacific region under the US 3rd Fleet's command and control," the statement notes, adding "the strike group became the first in recent history to demonstrate the command and control construct called 3rd Fleet Forward when units completed a six-month deployment last year."

Speaking last February about US Forces Korea's motto, "ready to fight tonight," Vice Adm. Joseph Aucoin said that moving assets from the 3rd Fleet to the Indo-Pacific region was driven by the fact that "if there's a fight tonight, it's probably going to happen on the Korean Peninsula."

"We do a lot of exercises," like Key Resolve and Ulchi Freedom Guardian, that show "the North that we're ready to deter any aggression," Aucoin said. "With those exercises and partnerships, I think on a daily basis, we show the North we're ready to effectively stop them if the need arises."

"What we have done in the past really 18 months is we, 3rd Fleet, have worked very closely with 7th Fleet and [Pacific Fleet] in developing our, 3rd Fleet's, capability to command and control forces forward in the Western Pacific, with the assumption that if something were to happen — and as [Aucoin] said, the number-one probability fight-tonight scenario would be on the Korean Peninsula," Vice Adm. Nora Tyson said at the same panel.

The carrier is expected to arrive near the Korean Peninsula in early February, when the Pyeongchang 2018 Winter Olympics kick off. 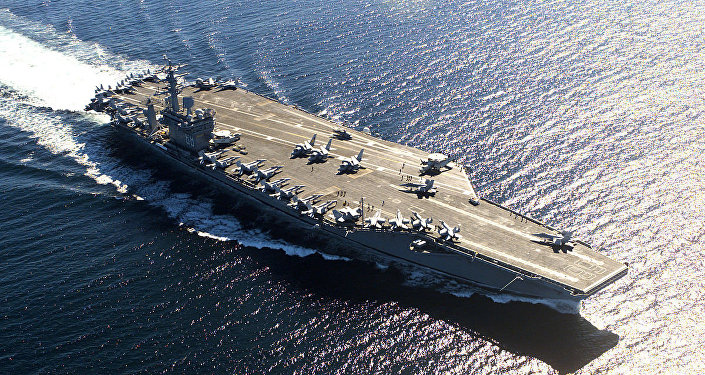 "We have some things that we've suggested to the North so that we can first concentrate on discussing the North's participation in the Winter Olympics and the Paralympics at Tuesday's talks," Baik Tea-hyun, a spokesman for South Korea's Unification Ministry, said Monday.

Pyongyang and Seoul re-opened a communications channel on January 3 for the first time in almost two years, according to the Wall Street Journal.

"Matters other than the Olympics may be discussed if possible, but we cannot forecast what will happen during the talks," a spokesman for the South Korean government told reporters Monday.