MOSCOW (Sputnik) - US intelligence agencies admit that they have underestimated the capabilities of North Korea in terms of the nuclear program development, local media reported Sunday, citing sources.

At the beginning of Donald Trump's presidency, the intelligence agencies assured the president that it would take about four years for North Korea to develop a ballistic missile capable of reaching US coast, so there was time to slow or stop the development of such missiles and Washington could focus on negotiations and countermeasures, The New York Times said.

However, after Pyongyang conducted hydrogen bomb test and launched several missiles with one of them capable of reaching US island of Guam, the intelligence community has come to a conclusion that it has underestimated North Korea's capabilities and chances to obtain foreign technologies, including the one based on an old Soviet engine, which enabled the country to rapidly advance its nuclear program.

© AFP 2019 / Britta Pedersen / dpa
'We've Got a Crazy in N Korea And We've Got Crazy in White House' - Congressman
Such miscalculations, according to the analysts, were caused by the belief that North Korea will need the same amount of time other countries needed during the period of the Cold War.

The CIA and other intelligence agencies have not paid due attention to North Korea's nuclear and missile tests and have been unable to foresee the North's rapid advance, which is now considered one of most significant intelligence failures, according to incumbent and former officials.

US National Security Adviser H.R. McMaster acknowledged in an interview with the newspaper that North Korean leader Kim Jong-un was quicker in a bid to turn North Korea into a nuclear power than most people believed.

As a result, McMaster stated, "we have to do everything we are doing with a greater degree of urgency, and we have to accelerate our own efforts to resolve the issue short of conflict."

Nevertheless, the official noted that Trump was not disturbed by the lack of warning. 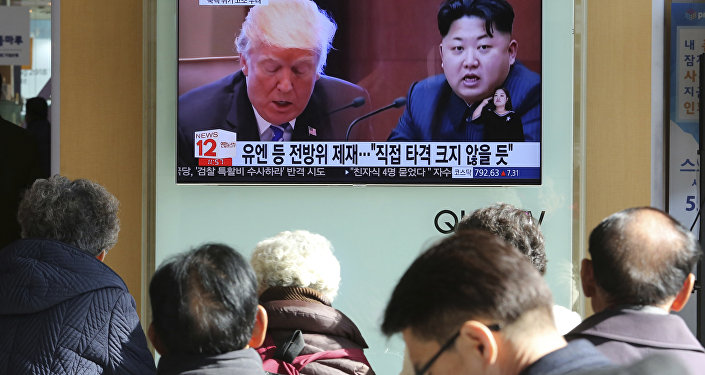 © AP Photo / Ahn Young-joon
'No Problem With That': Trump Ready for Talks With DPRK - Reports
Tensions on the Korean Peninsula escalated in 2017 as North Korea continues to conduct nuclear and ballistic missile tests in violation of UN Security Council resolutions. Pyongyang has already faced comprehensive sanctions in September and December but continued the development of its nuclear and ballistic missile programs.

The latest ballistic missile test took place in late November. The missile flew 950 kilometers (590 miles) and reached an altitude of 4,475 kilometers. The flight lasted for 53 minutes, after which the missile fell into the Sea of Japan, within the Japanese exclusive economic zone. Pyongyang later announced in an official statement that this was an intercontinental ballistic missile Hwasong-15, capable of reaching targets throughout the United States.