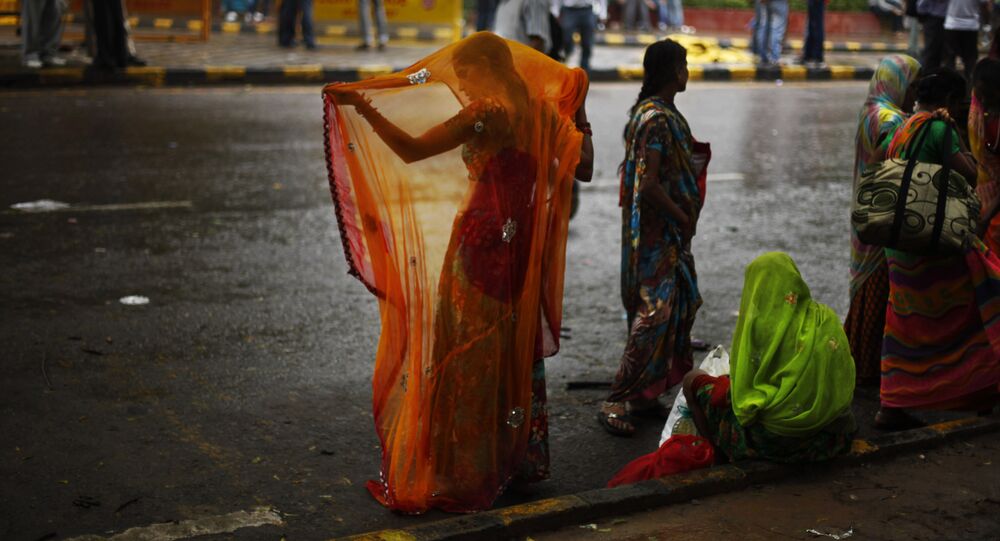 A horrific case out of India's Uttar Pradesh has once again put the spotlight on the sale of babies by poverty-stricken parents. Cases of baby selling for illegal adoptions and trafficking have been a problem in India for some time and the matter is more often than not directly correlated to poverty.

New Delhi (Sputnik) — A poverty-stricken Indian woman says she sold her 15-day old son to a stranger in order to gather money to fund her bed-ridden husband's medical treatment. Sanju Maurya, 30, from India's most populous state Uttar Pradesh told a local news agency that she gave away the infant, her third child, to a stranger in exchange for 45,000 Indian rupees or $660 dollars.

"We did not have enough money to afford the treatment," Sanju told the ANI.

#UttarPradesh: Woman sold her 15-day-old baby for Rs 45000 for treatment of her ailing husband in #Bareilly's #Mirganj, says "didn't have adequate funds" pic.twitter.com/HtJMZOtlpz

Though this incident is indeed shocking, it is not the first time that the sale of children by their parents has come to light in India. A fortnight ago, six persons were arrested for allegedly selling a newborn baby girl with her parents' consent, for $2,385 to a "childless couple" in the southern state of Tamil Nadu. The young couple said they wanted to sell their newborn as they did not have the means to raise the child. Similarly, on December 15 in the eastern state of Odisha, the state's child welfare department rescued a three-month-old baby from peddlers who were on the lookout for customers. The infant was one among four children sold by a mother who claimed she was unable to fend for them.

© Flickr / Jennifer Chong
India: Baby Trafficking Cuts Adoption, Boosts Illegal Trade
Earlier on December 7, a tribal man from the northeastern state of Tripura had confessed to the police that he sold his eight-month-old daughter for just $3 to fetch some food for his poor family. This was the third such incident in last six months in Tripura. "Due to poverty, I was compelled to sell my child in order to feed my family," Karna Debbarma from Sarat Chandra ADC village of south Maharanipur told reporters.

"Despite several appeals to the authorities to change my status, I only have an APL (above poverty line) ration card. Because of this, I did not even get the benefit of housing provided free of cost to the BPL (below poverty line) card holders.  But I am very poor and find it very difficult to feed my family by selling straw and bamboo," Debbarma added.

WATCH: 'A Slap for a Slap' Moment Between Indian Politician and Cop

According to an official estimate, over 230 million Indians live below what is called the "extreme poverty level," with a daily income of less than $1.90, while 680 million survive at just $3.10 a day, in terms of purchasing power parity. Drowning rural income, rising prices, and corruption-marred social security schemes have been aggravating poverty across the country.

© AP Photo / Channi Anand
India Saves Almost 200 Children in Biggest Child Labor Bust
The Indian government has set a target of brining ten million households (five persons in a household) out of poverty by 2019 through spending billions on social welfare schemes like the National Food Security Guarantee Scheme which provides 25 kilograms rice/wheat per month at highly subsidized rates, the Mahatma Gandhi National Rural Employment Guarantee Scheme (MGNREGS) to provide guaranteed jobs for the rural poor and the Indira Awas Yojana to provide house to the rural poor. However, the International Labor Organization said in a report last year that apart from ongoing poverty alleviation schemes, India needs to spend $61.11 billion a year, or 3.77% of its gross domestic product, to tackle the alarming levels of extreme poverty and rural distress.
...
Reddit
Google+
Blogger
Pinterest
StumbleUpon
Telegram
WhatsApp
60