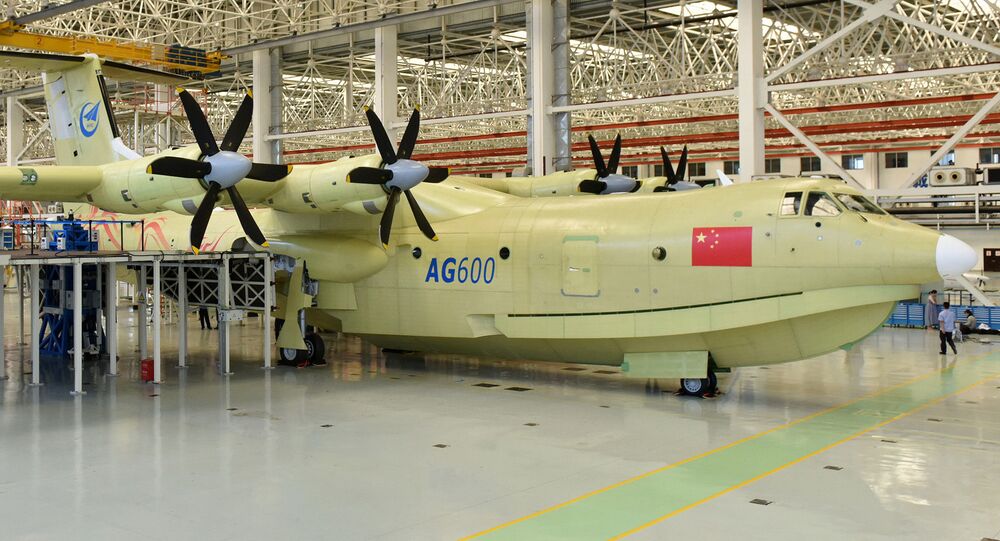 China’s AG600, a huge amphibious plane has successfully undergone its first flight. While many claim that the AG600 is the world’s largest amphibious plane, we here at Sputnik must observe that there have been other, larger examples of this kind of flying machine.

The AG600 Jiaolong ("Water Dragon") took its first flight over the South China Sea on Sunday, according to a report by the South China Morning Post (SCMP). Propelled by four turboprop engines, this beast can take off with 53.5 tons of cargo onboard, fly as far 3,500 miles, at altitudes approaching seven miles all while traveling at 350 mph. It can also scoop up 12 metric tons of water in just 20 seconds, which can be later used to douse of forest fires.

Designed primarily for maritime rescue missions, the Jiaolong can carry up to 50 people, and can land and take off from water. The machine was developed by China's Aviation Industry Corporation, and the company already has orders for 17 units, SCMP reports.

​It took approximately 8 years to develop the plane; it was supposed to take its maiden (first ever) flight earlier in April, but the ceremony was postponed due to undisclosed reasons.

According to Guinness Book of World Records, the largest amphibious plane in current use is Russian Beriev A-40. Built in 1986, the A-40 has a wingspan of almost 140 feet, and is just shy of 150 feet long. When first launched, the enormous aircraft achieved 148 world records, but, as only two of the planes built, the program was suspended in 2012, only to be revived in 2016.

Historically, both the Chinese and the Russian planes were surpassed by the world famous eccentric US aviator Howard Hughes, who designed and built the H-4 Hercules, an almost entirely wooden flying boat nicknamed the Spruce Goose..

​Powered by eight propeller-driven engines, the H-4 is the largest amphibious aircraft ever built, with a wingspan of 320 feet and a height of 80 feet. Only one prototype was constructed, but took off on November 2, 1947, and flew for about two miles over the coastal waters of Los Angeles. Hughes kept the prototype operational up until his death in 1976, which reportedly cost him some $1 million annually. The total development cost of the plane is estimated to have been some $23 million, which, when adjusted for inflation, would be $283 million in 2016.