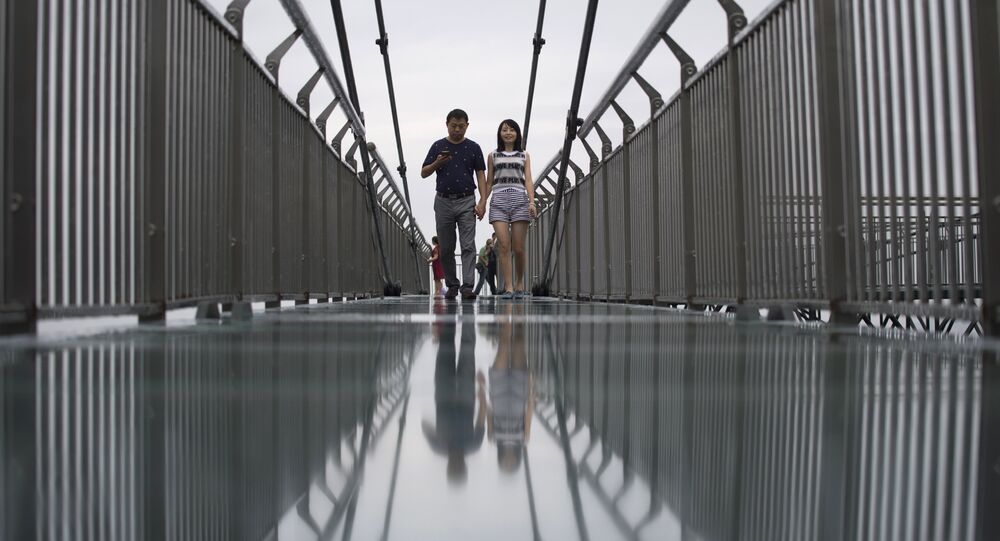 The record-smashing sky construction, which is all set to be unveiled in China’s Hebei Province on Sunday, surpasses the length of Zhangjiajie Glass Bridge, which previously held the record for the longest glass-bottomed structure.

China is ready to open what is said to be the world's longest glass bridge to the public on December 24, local media reported. Stretching above the valley between two steep cliffs in the Hongyagu Scenic Area in Pingshan county, the 488-meter-long construction is paved with 1,077 blocks of transparent glass, with a total weight of 70 metric tons.

The bridge, which hangs 218 meters above the valley floor, is a little wobbly to create a thrill for visitors,  it was actually designed to swing while they walk to its center. According to Hebei Bailu Group, the local tourism company responsible for building the bridge, it can safely support up to 2,000 people, but it is expected that only 500 will be let on it at any one time. It is also the only bridge in China supported by structures beneath the span, constructors claimed.

World’s longest #glass-bottom bridge is scheduled to open to public on Sunday in Shijiazhuang, Hebei, #China. The bridge is 488 meters long, 2 meters wide, and hangs 218 meters above ground. pic.twitter.com/aPbVjuhigK

Hikers crossing the new skywalk, which can withstand even the strongest winds, will be able to enjoy spectacular views of Hongyagu, which boasts a unique landscape with mountains, natural waterfalls, ancient towns and temples.

Hongyagu's new bridge is not the first record-setting crossing for China. The structure measuring 430 meters in length and suspended 300 meters above China's Zhangjiajie Canyon, Hunan Province, was opened to the public on August 20, 2016. It was considered the world's longest glass-bottomed bridge at the time. However, this record among suspended glass bridges was beaten in August 2017, when the 494-meter-long Charles Kuonen Suspension Bridge opened in the Swiss Alps near the village of Randa.