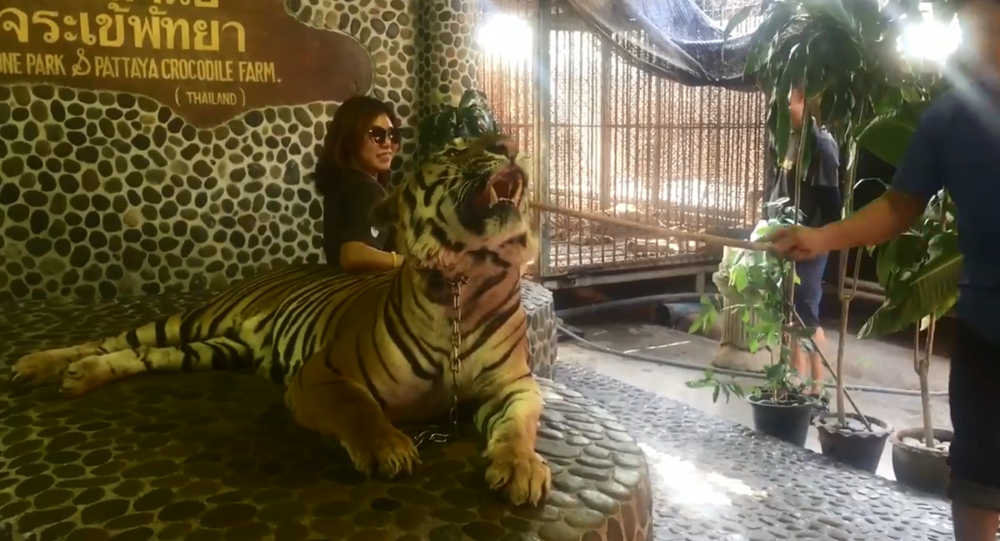 A Thai zoo has come under fire after a video posted on Facebook Monday showed a zookeeper repeatedly poking a tiger in the face in an attempt to elicit roars for tourist photos.

"Today witnessed the ugliness of tourism and wildlife in Pattaya," Wiek wrote in the video's caption. "This tiger gets poked all day, hundreds of times a day so it will roar for the picture with tourists."

Disgusted and upset with the images, netizens lashed out at the handler with comments suggesting he be prodded the stick instead and calling for his dismissal.

In response to the growing outrage, a spokesperson for the zoo announced that the attendant had been transferred to another position after officials became aware of the incident.

"The owner, he loves animals and he will not allow staff to hurt his animals," the spokesperson told AFP.

© AFP 2020 / YASUYOSHI CHIBA
Floating Garbage Island Gets Closer to Thailand's Major Tourism Spots (PHOTO)
Despite the zoo's attempt to squash the incident, the footage has only reignited criticism of Thailand's ever-growing tourism industry, which allows tourists to ride elephants, hold monkeys and, of course, pet tigers, all for a certain dollar amount.

This behavior, say animal rights groups, leads to the inhumane treatment of animals who are left to live their lives chained up and in a harmful living environment.

"We believe that taking of selfies with wildlife should be stopped completely," Wiek told AFP. "Every year hundreds of people are bitten or clawed in similar situations."

Though Thailand introduced new legislation in 2015 to curb animal abuse, it has been poorly enforced, Reuters reported.

In 2016, wildlife officials discovered hundreds of dead tiger cubs while rescuing an estimated 137 tigers from a Buddhist temple in Bangkok. While officials are still unsure why the temple was keeping dead cubs in its possession, officials speculated the carcasses were "used for traditional Chinese medicine" as the rest were thrown into the tourism trade.

"We know that some zoos and a lot of wildlife operators supply animals into the black market," Steve Galster, an executive director of Freeland, a Bangkok-based group fighting human and wildlife trafficking, told Reuters. "They breed the animals, have some there to make money from tourists, and sell the extra ones."

According to a July report from the World Animal Protectors, Thailand is the global epicenter for elephant tourism. Roughly 2,198 elephants are held in inadequate conditions.