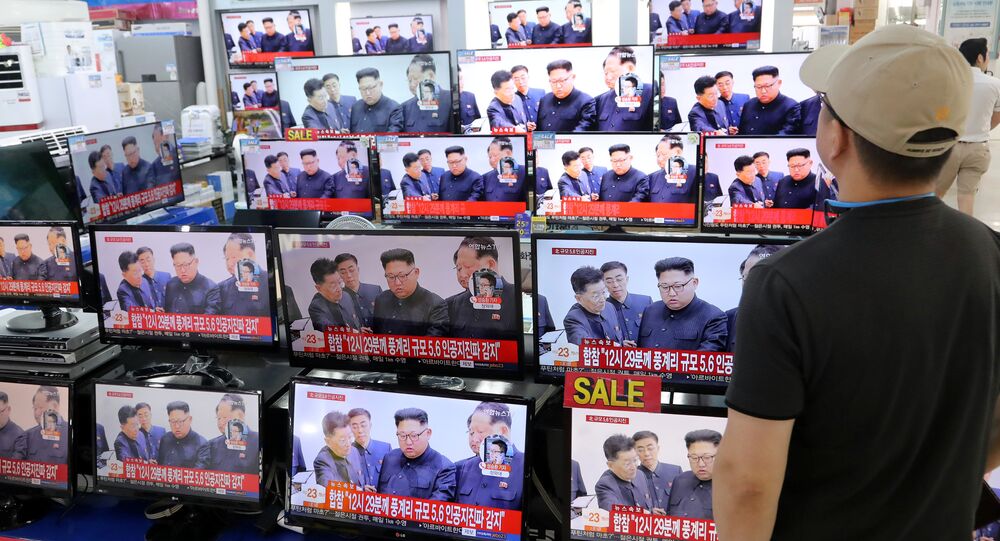 MOSCOW (Sputnik) - North Korea does not intend to discuss its nuclear program with the United States since it sees Washington’s initiative as an attempt to advance a UN Security Council (UNSC) resolution on new sanctions against Pyongyang, the official newspaper of the Central Committee of the North Korean Workers' Party said on Tuesday.

"The US is trying to shift responsibility for tensions on the Korean Peninsula to us with its offensive dialogue. The move is seen as being intended to set the tone for manipulating new UN Security Council resolutions that may include a maritime blockade if we do not accept dialogue aimed at discussing the abandonment of our nuclear weapons… There is no change in our stance that we will not budge an inch in our march toward strengthening our nuclear force," the Rodong Sinmun newspaper stated.

The statement comes a week after US Secretary of State Rex Tillerson announced that Washington was "ready to talk anytime" with North Korea "without precondition," but emphasized that "the diplomatic effort has to be backed up by a very credible military alternative."

Speaking at the UNSC later that week, Tillerson said that the United States would continue pressuring Pyongyang, urging Russia and China to join the move in order to bring North Korea to the negotiating table to suspend its nuclear and ballistic missile programs.

The possibility of a naval blockade of North Korea was brought forward by Washington during the discussion of sanctions at the UNSC in September, but the provision was not included in the resolution, since China and Russia opposed such measures.

It its turn, North Korea's Foreign Ministry said the country would consider a naval blockade against it an act of war and take "harsh retaliatory measures."

Separartely, US President Donald Trump asked for Russia's help in settling the North Korean nuclear issue during a phone conversation held last week, with the Russian Foreign Ministry saying that Moscow and Beijing are ready to make measures in ortder to prevent the crisis' escalation.

© AP Photo / Jorge Silva/Pool Photo
Trump Says Would Like to Have Russia's Help With North Korea
The situation on the Korean Peninsula has escalated since this summer as Pyongyang conducted a nuclear test and several missile tests, with the latest taking place on November 28, when the DPRK tested its most advanced intercontinental ballistic missile (ICBM) yet, known as the Hwasong-15, capable of reaching any target within the mainland United States.

Most recently, US National Security Adviser Herbert Raymond McMaster said that the while Washington has been trying to settle the crisis on tbhe Korean Peninsula by peaceful means, this path to settlement was not the only option on the agenda.