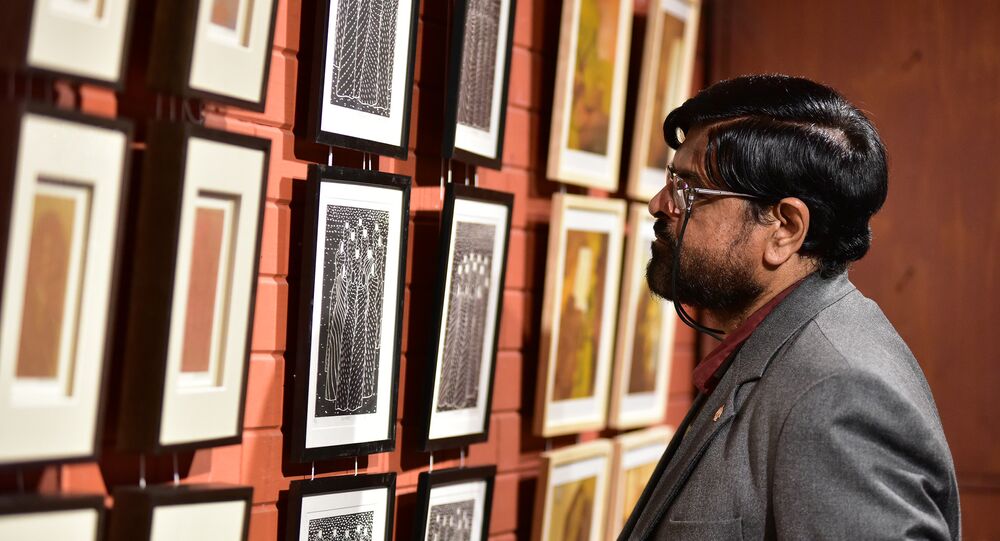 ‘Indian Contemporaries’ – an eclectic mix of Indian contemporary arts is currently on exhibition at New Delhi’s India Habitat Center. The show recently returned from Russia after wowing the audience at Art Russia 2017 in Nizhny Novgorod.

New Delhi (Sputnik) — The exhibition includes the works of 44 Indian artists who have come together to showcase their work to the Russian and Indian audience as part of the 70th anniversary celebrations of Indo-Russian diplomatic relations.

Curated by artist Aakshat Sinha, the exhibition was supported by the Embassy of the Russian Federation in India. High-ranking officials of the Russian Embassy and the Lalit Kala Academy, India's apex body for the promotion of fine arts, jointly inaugurated the show in New Delhi.

"It is time for the young minds from both countries to come forward and start a new wave of collaboration and exchange in the field of art. Youths are the baton bearers, if they come together and know each other then it ultimately brings the two cultures together," Krishna Setty, director of Lalit Kala Academy, told Sputnik.

Curator Akshat Sinha says the show aims to allow people to connect through a different level of engagement, in order to create the much needed new age Indo-Russian solidarity.

"It was much needed. After those initial grand alliances and cooperation in the field of literature, cinema, art etc, there was a void. We are trying to fill in that gap and we are glad that the Russian audience welcomed the show with open hearts," Akshat Sinha told Sputnik.

Some of the artists whose works are on display include Aadit Basu, Aakshat Sinha, Abid Zaidi, Alison Pinto, Amit Dutt, Anand Radhakrishnan and Ananda Moy Banerji, among others.