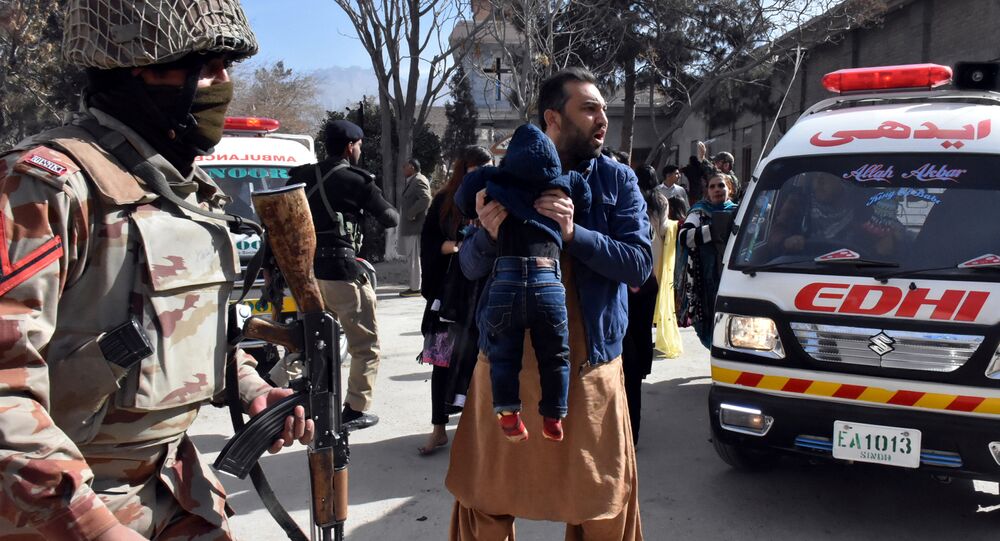 Gunmen reportedly rushed into a Christian church in Quetta as the Sunday service was about to start, detonating a bomb and opening fire on local worshippers. The Daesh terror group has claimed responsibility for the attack.

Several gunmen have reportedly attacked a Christian church in the southern Pakistani city of Quetta. The attack was followed by a blast, claiming the lives of at least nine people and injuring 50 more, Geo TV broadcaster has reported, citing Civil Hospital spokesperson Dr. Waseem Baig.

Earlier in the day, media reported that five people were killed and 16 were injured.

Sarfaraz Bugti, the home minister of the province of Balochistan, has commented on the matter, as quoted by the outlet, saying that the attack was apparently targeting the church of a Christian community, adding that a suicide bomber blew himself up at the church's entrance when stopped by the security services while another one had managed to get inside.

The minister stated that up to 400 people could have been inside the church, stressing that 'until terrorists' safe haven remained in Afghanistan, attacks in Pakistan would continue'.

The Daesh terror group has claimed responsibility for the attack yet, but failing to provide any evidence of the claim.

The local authorities have launched an investigation into the tragic incident.

According to the official statement of Health Ministry, an emergency has been declared in local public hospitals.

"All doctors and paramedics staff shall be vigilant and must use all available resources to give maximum proper health care facilities to the injured ones," the statement reads.

Request for blood donations at Civil Hospital #Quetta for the injureds of #Zarghoon road Church #Quetta.

According to the Geo TV channel, citing local police sources, the blast is believed to be a suicide attack.

Christians under attack, bomb blast and firing in a Church near Railway station, the church is located near the "Marker House", the family of renowned Pakistani diplomat Jamshed Marker #Quetta

Meanwhile, the country's President Mamnoon Hussain condemned the attack and expressed his condolences to the families of victims, ordering to ensure that the injured were provided with best medical treatment possible. The Foreign Ministry has also condemned the attack, calling it a cowardly deed and stressing the Pakistani government's commitment to the fight against terrorism.

Attack of terrorists on Zarghoon road church in Quetta is condemned. Pakistan’s resolve against terrorism cannot be deterred by these cowardly acts.