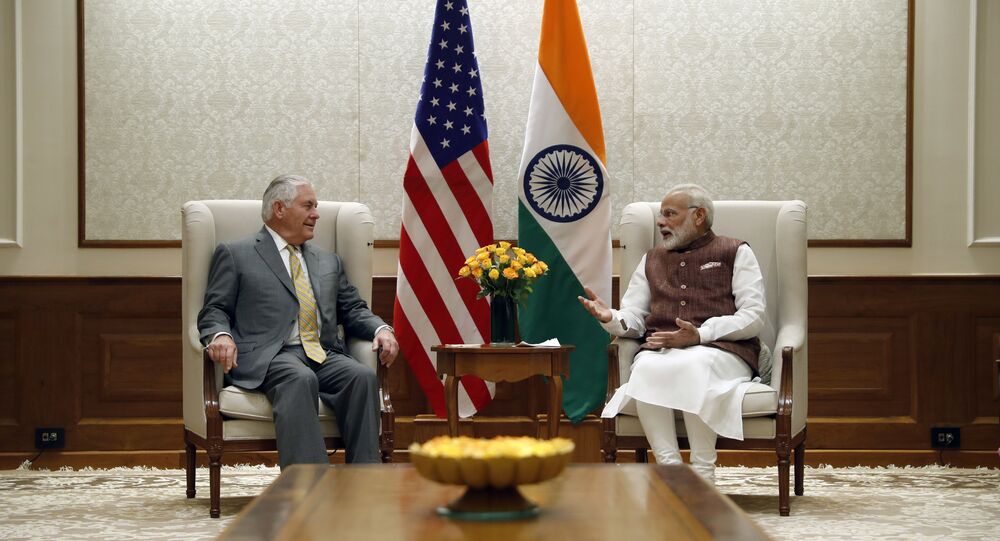 New Delhi’s decision to engage in an informal quadrilateral security framework with the US, Japan and Australia is being seen as a manifestation of its unease over China’s growing economic and military prowess in the Asia Pacific region. But experts have cautioned the government against entering into any formal alliance with the US.

New Delhi (Sputnik) — US Secretary of State Rex W. Tillerson has advocated establishing a definite structure within the Quadrilateral Security Dialogue or Quad by formally including India in the grouping. While speaking at the 2017 Atlantic Council-Korea Foundation Forum in Washington earlier, Tillerson said that US has elevated its engagement with India with the Quad in focus.

"As part of the free and open Indo-Pacific, we have elevated our engagement with India. We've long had a trilateral relationship in the Indo-Pacific between Japan, Australia, and the U.S., and we're now working towards whether this will become — a quad relationship which includes India because of the importance of India's rising economy and the shared national security concerns that we have with India," Tillerson said.

© Sputnik
The New Anti-China 'Quadrilateral Security Dialogue'
In November, the US, Japan, Australia and India reached an agreement to create an "Indo-Pacific" security framework (Quad) for patrolling and exerting its influence on waterways from the Indian Ocean to the Pacific and the (disputed) East and South China Seas. Though the US has denied having any plans to stifle China's growth, there were speculations that the Quad will basically have a China-centric security agenda. However, a month later, India's foreign minister Sushma Swaraj met her Chinese and Russian counterparts and discussed deepening coordination in the "Asia-Pacific" region. The move was seen by analysts as an effort by India to demonstrate that it has multiple options in a multi-polar world and that it is not aligned with any one group or any one country.

Indian experts are of the opinion that China's aggressive diplomacy has definitely pushed India closer to the US. Nevertheless, New Delhi should tread carefully, bearing in mind its relationship with traditional partners, before plunging into any kind of a formal alliance with the US.

"The United States can have its preferences, but we have to take decisions on the basis of our interests and foreign policy changes and how to keep a balance with our old and traditional partners," Kanwal Sibal, a former ambassador and foreign policy expert, told Sputnik.

Many other analysts have voiced similar concerns on the social media.

The "Quad" was supposed to be an informal grouping. But Tillerson seeks a formal alliance — by expanding the U.S.-Australia-Japan trilateral into a quadrilateral to include India. This demands one issue be sorted out: Unlike Japan and Australia, India is not a treaty ally of U.S. pic.twitter.com/YPXPOwiQQw