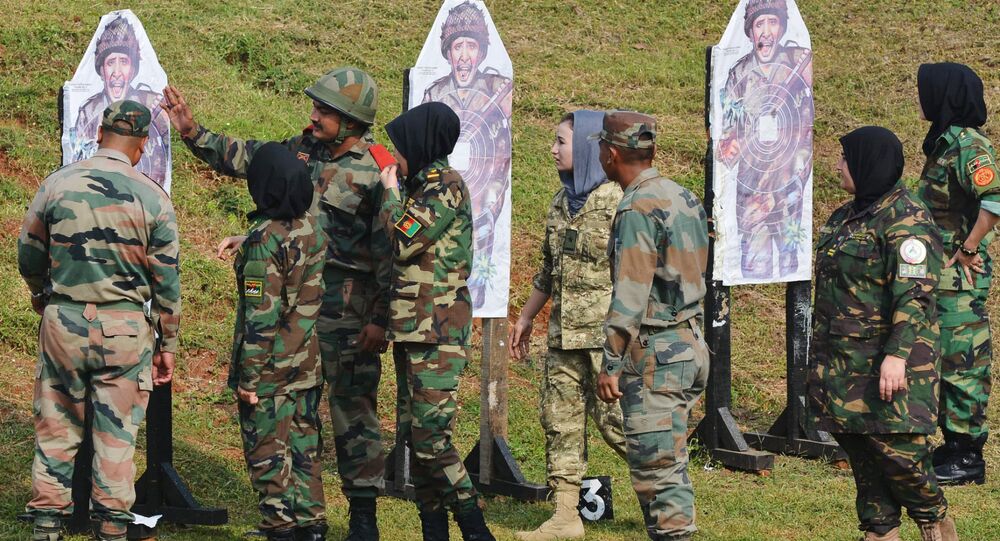 As part of Afghanistan’s ambitious target of making its armed forces inclusive of at least 10 percent women, a group of freshly recruited women officers of the Afghan Army is learning warfare techniques at India’s Officers Training Academy.

New Delhi (Sputnik) — At first, a group of women officers of the Afghan National Army is undergoing warfare training at India's Officers Training Academy. The women officers have been selected from different provinces and represent all the major ethnicities of Afghanistan.

As many as twenty women officers from Afghanistan Army have arrived at the Officers' Training Academy in Chennai for a training program.https://t.co/wUhyE7776T

The academy is situated in Chennai, the capital city of the southern state of Tamil Nadu, is imparting training on weapons handling and firing, communications skills, warfare tactics, administration and logistics to the women officers. The use of hand grenades, assault rifles including the AK-47, live firing and evaluation is also part of their training module that will conclude on December 24. The 20-day crash course is reported to be a pilot for a full training scheme being planned for next year.

© REUTERS / Raheb Homavandi
India Sends 1st Freight to Afghanistan via Iran Skirting Pakistani Bottlenecks
India has so far trained more than 4000 Afghan National Army (ANA) soldiers but this is the first time that the country is hosting women officers. Currently, women constitute only two percent of security forces in Afghanistan. Under the Taliban's regime (1996-2001), women in Afghanistan were banned from education and were not allowed outside unless wearing a burqa and accompanied by a man. After the fall of the regime, changing people's mindset about women and ensuring gender equality has been a challenge for successive governments. The Afghan National Army's effort in recruiting women into different ranks including combat roles is seen as a big leap in this direction and it has enthused women officers of the Indian Army too.

"Yes, I (will) definitely give a big yes…we should be given a fair opportunity in combat…all of us feel we could be in the forefront," Major Sanjana JR was quoted as saying by the PTI.

The Indian women officers who are coordinating the training for their Afghani counterparts say they favor women in combat roles.