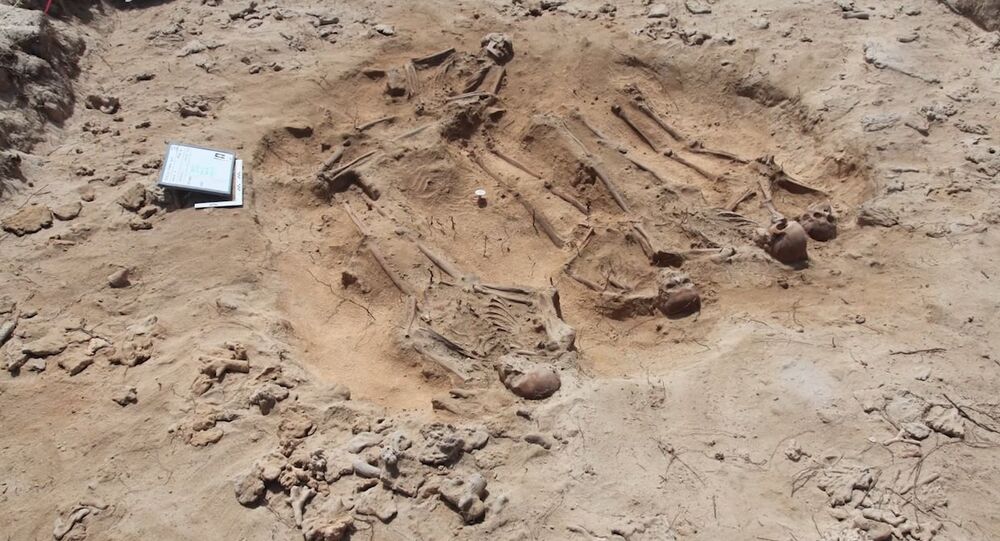 It seems like a script written for the mystery and adventure TV show “Lost” which kept people glued to their television screens back in 2004, however the finding of a mass grave and the secrets it reveals about the survivors on an Australian island is no fiction.

Researchers have discovered a mass grave holding the remains of five individuals who possibly were victims of the shipwrecked Dutch merchant vessel Batavia.

It was Australia's most bloody maritime mutiny which took place in 1629 when 341 people aboard the “Batavia” shipwrecked on a small coral island west of Australia.

Centuries later the tragic voyage is still revealing its secrets.

Around 60 people were lost in the shipwreck, with more than 280 survivors swimming onto Beacon Island which has since been nicknamed both “Batavia's Graveyard” and “Murder Island.”

© AFP 2020 / STR
Ancient Skull From China Could Rewrite History of Human Evolution
In November archaeologists found five new bodies buried together in a communal grave. This was the latest skeletal discovery in an ongoing effort to find out more about the events surrounding the fatal sea voyage.

"A total of 10 individuals have been discovered in the central part of Beacon Island in the past three years during our research project, providing valuable new information about the events following the wreck of the Batavia," anthropologist Daniel Franklin from the University of Western Australia was reported by Science Alert as saying.

According to historic records more than 280 people were thought to have survived the Batavia's wreck, but many perished in a brutal mutiny that took place some months later.

Survivor of the shipwreck, merchant Jeronimus Cornelisz, recruited some 40 men in a mutinous bid to improve their odds of survival, as supplies of potable water became scarce. He ordered groups of people to sail to nearby islands in small boats, giving them the false hope that they might find water there.

© AP Photo / Hamada Elrasam
Ancient Luxor Tomb Discovery Could Inflate Egypt's Sagging Tourist Industry (VIDEO)
He then confiscated soldiers' weapons, and organized the slaughter of many of the remaining survivors, including women and children.

Some 115 survivors are thought to have been killed during the mutiny before rescuers arrived.

Researchers point out that the number of those laid to rest in the newly discovered burial may have been higher than previously thought.

"Isotopic analyses are allowing us to determine where these people originated from," archaeologist Liesbeth Smits from the University of Amsterdam said.

"Surprisingly many of them did not come from Holland, but moved there to join the ships of the Dutch East India Company,” she added.

Currently the scientists are analyzing the recently found skeletons as they still have a lot more to discover regarding this gruesome story of survival.