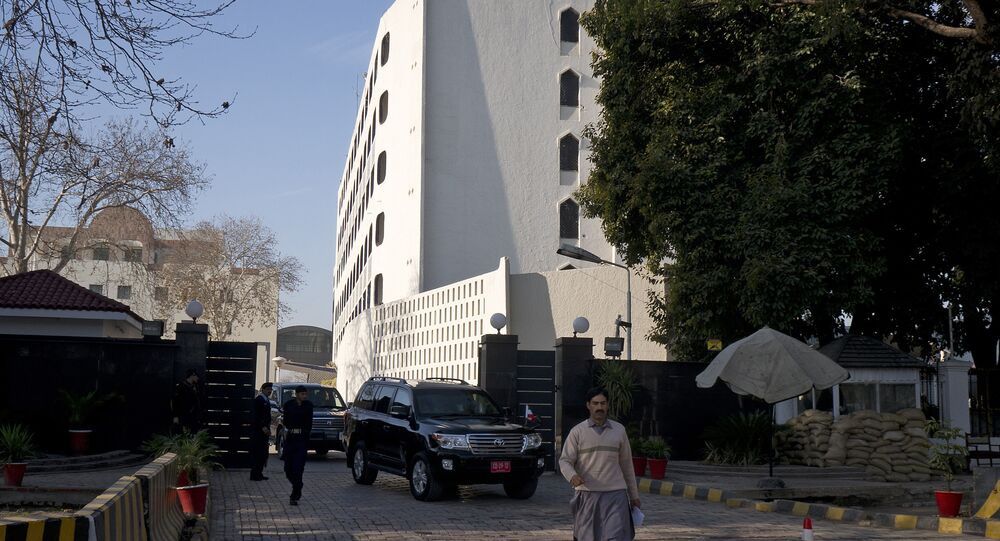 ‘Don’t Drag Us into Your Electoral Battle’ – Pakistan Tells India

Indian Prime Minister Narendra Modi had cited a recent “secret” meeting between the leaders of the opposition Congress party and Pakistani officials as the root cause of his suspicion that Pakistan was trying to influence the outcome of the Gujarat provincial elections.

New Delhi (Sputnik) — Reacting on Indian Prime Minister Narendra Modi's allegations that Pakistan was trying to influence the outcome of the ongoing voting in the Indian state of Gujarat for a new provincial government, Pakistan's Ministry of Foreign Affairs has called it a "fabricated conspiracy" and has advised the Indian leaders to win on their own strength instead of playing the Pakistan card to gain political mileage.

India should stop dragging Pakistan into its electoral debate and win victories on own strength rather than fabricated conspiracies, which are utterly baseless and irresponsible.

© AFP 2020 / STR
India Alarmed By China's Plan to Deploy Warships in Pakistan's Gwadar Port
Modi had blamed Islamabad for meddling in the Gujarat election while addressing a rally in Palanpur. He alleged that leaders of the opposing Congress party had held a secret meeting with Pakistani officials at Mani Shankar Aiyar's, one of their leaders, house.

"There were media reports about a meeting at Mani Shankar Aiyar's house in which Pakistan's High Commissioner, Pakistan's former Foreign Minister, India's former Vice-President and former Prime Minister Manmohan Singh were present," Modi had said at an election rally at Palanpur.

The same Mani Shankar Aiyar, who insulted Gujarat, held secret meetings with Pakistan High Commissioner. What was the reason? Why are people who previously held high posts in military-intelligence establishment of Pak writing that we should help make Ahmed Patel the CM?: PM Modi pic.twitter.com/lc9G57NlKI

"Former Foreign Minister of Pakistan was in Delhi to take part in a marriage ceremony and a reception was organized in his honor. Former Pakistani High Commissioner to India and other officials also attended it. Former Indian Prime Minister Manmohan Singh also attended the reception. Prime Minister [Modi] must apologize as it was not a secret meeting with Pakistani officials as alleged by him," Anand Sharma, a senior spokesperson of the Congress party, told Sputnik.

© AP Photo / Bullit Marquez
India Prods ASEAN to Take Action Against China, Pakistan for Helping North Korea
Former Indian Prime Minister Manmohan Singh also clarified that the Gujarat election was not discussed during the meeting he had with the Pakistani officials.

"I am deeply anguished by the falsehood and canards being spread to score political points in a lost cause by none less than Prime Minister Modi," former Prime Minister Manmohan Singh said in a statement.

Gujarat will hold the final bout of polling on Thursday and the results will be declared on Monday, December 18.