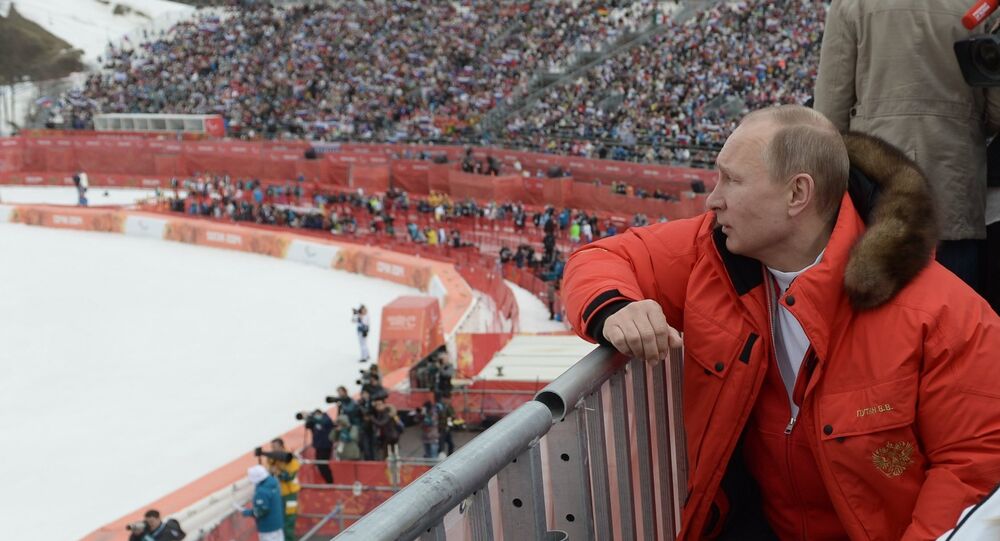 The IOC’s decision to ban Russia from the 2018 Winter Olympics in South Korea could dash Seoul’s hopes to use President Vladimir Putin’s presence at the Games as a means of preventing any possible confrontation with North Korea, local media reports say.

Many South Koreans worry that the loss of Russian spectators at the Games could be a big blow to the Winter Olympics, which have historically attracted fewer attendees than the Summer Games. Even more importantly, without Putin in attendance the new South Korean government would find it hard to try to mend fences with Pyongyang.

Russia’s absence at the Games would be a blow to the Olympics of Peace concept promoted by South Korean President Moon Jae-in who believes that support from Russia, which has close ties with Pyongyang, is absolutely indispensable.

© REUTERS / Kim Hong-Ji
S Korea Extends Hope Russia Will Achieve Great Results at 2018 Winter Olympics
President Moon wants to see North Korean athletes in Pyeongchang and considers the 2018 Games and the future ones in Tokyo and Beijing as “a chance to build peace on the Korean peninsula, in Southeast Asia and the whole world.”

According to South Korean media, Moon fears that if the Russians do not show up, the Kremlin will have less reason to persuade the North Koreans to come to Pyeongchang.

Still, buoyed by Moscow’s agreement to allow its athletes to participate in the Games as “neutrals,” the South Korean president has instructed the Foreign Ministry to hold a series of closed-door consultations with Russian officials with a promise to provide maximum assistance to Russian athletes who decide to take part in the Games.

Seoul also plans to convey to the IOC the idea that the Olympics in Pyeongchang are all-important to the cause of peace and hopes that the IOC will find more far-sighted alternative options to offer Russia.

Adding urgency to the whole situation, the US is reportedly undecided whether or not to send its Olympic team to Pyeongchang. What is certain is that President Donald Trump is not going to come.

While Seoul hopes that the postponement of its planned joint wargames with the US would prevent any aggressive response from Pyongyang,

© Sputnik / Alexei FIlippov
'Olympic Hockey Without Russia Would Be Like World Cup Soccer Without Brazil'
Washington fears that by the time the Games kick off, North Korea will already have full nuclear capability forcing the US to respond in force thus jeopardizing the security of its athletes.

Small wonder that South Korea is working hard to mend fences with the North and is urging other countries to persuade Pyongyang to let its Olympians take part in the Games and refrain from conducting any missile or nuclear tests before and during the Games.

On December 13, President Moon is due to arrive in Beijing in a bid to persuade his Chinese counterpart Xi Jinping to convey this message to the North Korean leader.

As for Moscow, even if Russian athletes go to Pyeongchang, the chances of President Putin attending the Games’ opening ceremony are slim.

However, if the Russian team is allowed to march under the national flag at the Games’ closing ceremony as promised, Putin could possibly reconsider.

Whether the Russian leader will be able to untangle the Gordian knot of Korean problems is hard to say, but, as the old wisdom goes, there is no good war or bad peace.