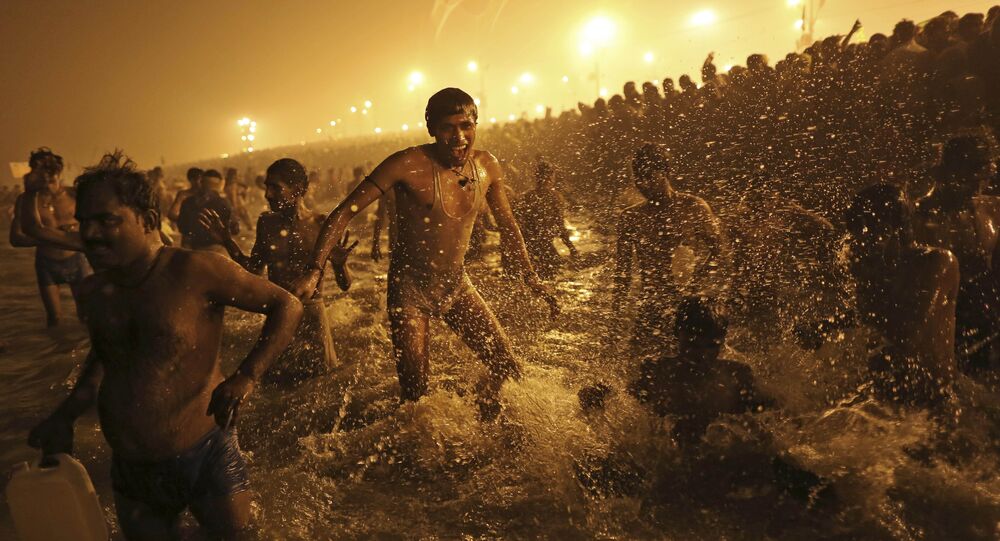 New Delhi (Sputnik) – UNESCO has recognized 'Kumbh Mela', India's sacred religious congregation, as the world's largest peaceful gathering of pilgrims. The decision was taken by the intergovernmental committee for the safeguarding of the intangible cultural heritage under UNESCO during its 12th session, held at Jeju, South Korea.

Indian Prime Minister Narendra Modi said that it's a moment of joy and pride for the country.

PM @narendramodi said on the inclusion of the holy Kumbh Mela in the Intangible Cultural Heritage List by @UNESCO that it is a very joy and pride moment for the country. pic.twitter.com/5rdKOBVQKD

The inscription of 'Kumbh Mela' was recommended by the expert body which examines in detail the nominations submitted by members states. The Committee observed that 'Kumbh Mela' was the largest peaceful congregation of pilgrims on Earth.

"The festival, held in Allahabad, Haridwar, Ujjain, and Nasik, represents a syncretic set of rituals related to worship in India. It is a social ritual and festive event closely linked to the community's perception of its own history and memory. The element is compatible with existing international human rights instruments since people from all walks of life, without any discrimination, participate in the festival with equal fervor. As a religious festival, the tolerance and inclusiveness that ‘Kumbh Mela' demonstrates are especially valuable for the contemporary world," India's Ministry of External Affairs said in a statement.

'Kumbh' in Hindi means nectar and ‘Mela' means congregation. The Kumbh Mela has a legend around it which includes the battle between Gods and Demons over a pot of nectar of immortality during which, a few drops of this nectar fell in Haridwar, Allahabad, Ujjain, and Nasik. Since then, millions of pilgrims congregate at these places alternately every three years. Hindus believe that those who bathe in the sacred waters during the Kumbh Mela are eternally blessed by the divine. All their sins are washed away and they come one step closer to salvation.

"The Committee also took note of the fact that knowledge and skills related to ‘Kumbh Mela' are transmitted through the Guru-Shishya parampara (teacher-student relationship) by way of saints and sadhus teaching their disciples about traditional rituals and chants. This would ensure the continuity and viability of this festival in perpetuity," the Ministry of External Affairs said.

India's Minister for Culture Dr. Mahesh Sharma said that it is a proud moment for India.

"India's cultural heritage has both tangible and intangible elements, which is unique. Kumbh Mela is the largest religious congregation on Earth and its uniqueness is that it is peaceful and reflects India's unity in diversity. The declaration of Kumbh Mela as the Intangible Heritage of Humanity by UNESCO reflects that now the world is recognizing India's heritage and culture," Indian Minister of State for Culture Dr. Mahesh Sharma told Sputnik.