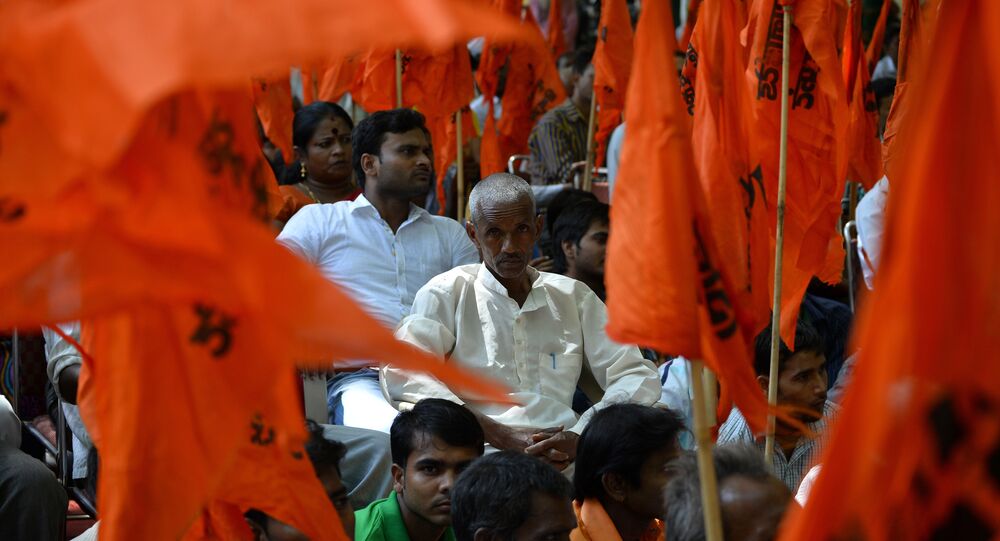 A man in India’s Rajasthan recorded a video of himself murdering a Muslim for allegedly tricking a Hindu girl into living with him. The video shows the murderer catching the victim unaware and pinning him to the ground before hacking him with a crude weapon and eventually setting him on fire.

New Delhi (Sputnik) – In a chilling murder video that has emerged from the Indian state of Rajasthan, a man is seen hacking another man with a wooden plow and setting him on fire alive. The murderer, identified as Shambhulal Raigar has been arrested by the police who claimed that the victim was a Muslim and that it was a case of ‘Love Jihad.' The victim has been identified as Mohammad Bhoota.

According to the police, the incident came to light after the video went viral on social media.

A man burnt alive allegedly for committing love jihad in Rajasthan's Rajsamand. The attacker filmed the act which was later put on social media & warned those involved in alleged love-jihad will meet similar fate. The accused has been arrested, Rajasthan HM confirms to CNN-News18 pic.twitter.com/QrRXS4phAr

​"I appeal to all the women of our country not to fall prey to the trap set by Muslim men who in the name of love jihad will exploit you and eventually abandon you. I am doing this to save a girl who has fallen trap to 'love jihad'. Love Jihadis, either leave our country or all of you will meet the same fate as this man," Shambhulal Raigar is heard shouting before he sets bleeding Bhoota, still alive, on fire.

© AP Photo / Lefteris Pitarakis
‘Misusing Freedom’: Muslim Women in India Demand End to Shariah Courts
The half-burnt body of the victim was found on a deserted road after locals alerted the police.

Rajasthan Home Minister Gulab Chand Kataria called the video as gut-wrenching and assured stringent action against the perpetrator. "It is shocking how he killed the man and made a video of it. The accused has been arrested and a special investigation team (SIT) has been set up for investigation in the case," Kataria told to the media.

Meanwhile, anticipating a communal flare-up in the area due to the viral video, internet services have been closed in Rajsamand district where the incident took place.