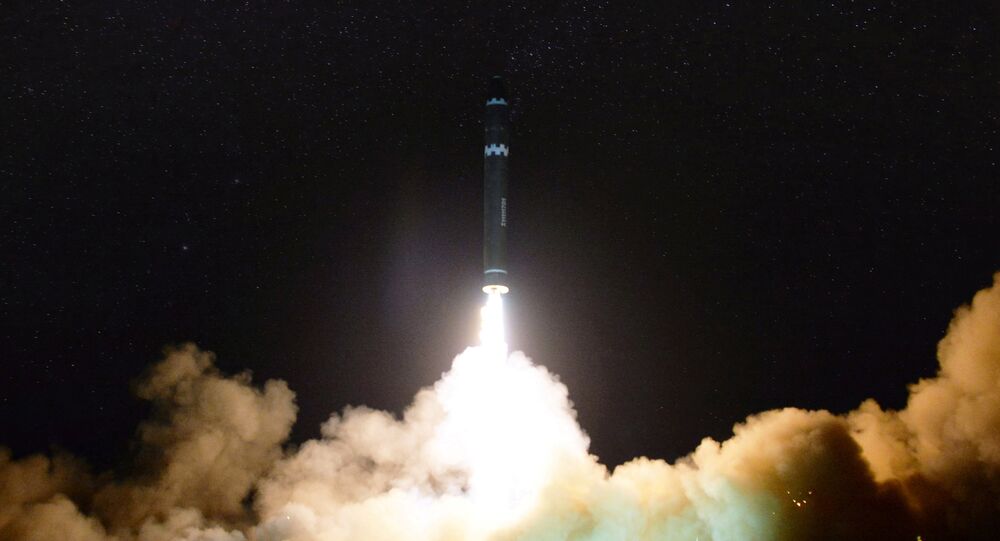 When North Korean state media outlets claimed to provide visual evidence of a Hwasong-15 mobile launched intercontinental ballistic missile test, the photos they used were fake, according an analysis of the stars featured in the photos.

Two pictures taken within seconds of the missile's launch from the same vantage point should show the same starry background, "but they don't," Marco Langbroek, a spy satellite tracker and Paleolithic archaeologist said in a December 5 blog post.

"One shows Orion, which is south-southwest," Langbroek said, and "the other shows Andromeda with the Andromeda galaxy… which is northwest," he noted.

So, I just discovered that the North Koreans DID tamper with their #Hwasong15 launch photo's! Two images from clearly same viewpoint, but dramatically different star backgrounds! Orion (Southeast) versus Andromeda (Northwest)! @planet4589 pic.twitter.com/ZzhFa3HwaM

​"These two images from the same viewpoint show dramatically opposite sky areas," the expert continued.

Of course, Langbroek doesn't deny that the event happened. Instead, the analyst concluded that the starry background was added to the photos and wasn't original. Not all images were tampered with, he noted.

More evidence of tampered #Hwasong15 imagery: two images, mirrors of each other (look at exhaust plume, lack of number on missile body 2nd image) so opposite viewpoints. Yet starfield in background both south-southeast, Orion and Canis major (but with Sirius missing!)@planet4589 pic.twitter.com/ZqfygbOwFa

​"The most likely reason is simple that they did it for aesthetics. An ICBM soaring into the stars makes for good propaganda images. They apparently just didn't care to do it correctly," he noted.

It's okay though, apparently other countries do this sort of thing, too.

Earlier in the year the Chinese People's Liberation Army published celebratory pictures of massive ships and high powered jets to commemorate the PLA's 68th anniversary. The only problem was that the pictures featured Russian MiG-35 aircraft and US-made amphibious vessels — modern implements of war. The PLA later apologized, marking the first time the Defense Ministry had atoned for its errors, the Global Times reported.