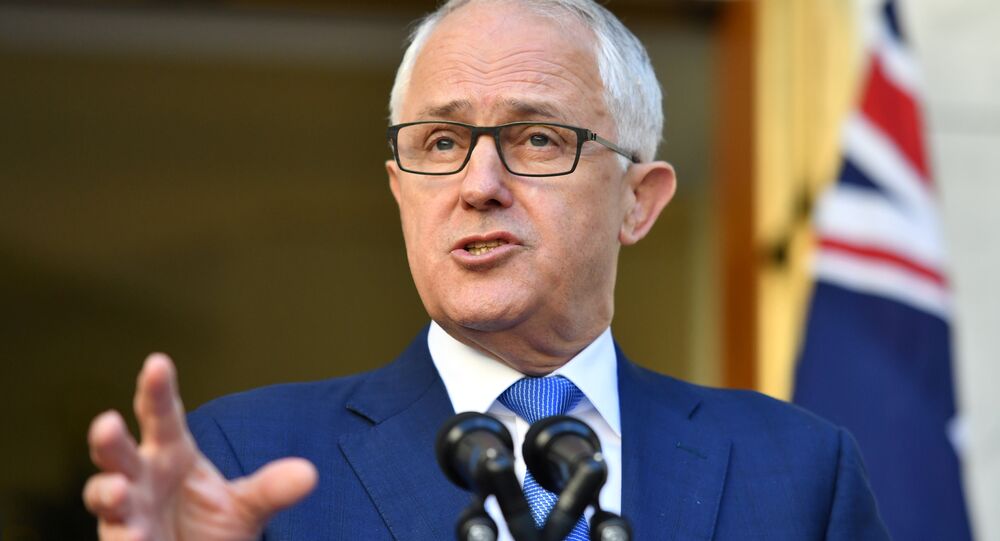 As claims of outside interference in Australian politics have reached fever pitch, Canberra has outlined plans to broaden the definitions of offenses against national security and create new categories of political crimes.

Australian Prime Minister Malcolm Turnbull, flanked by the Attorney General and Leader of the ruling Liberal Party in the Senate, announced December 5 a raft of new measures to ban political funding from abroad, as well as the introduction of new criminal offenses related to working with 'foreign entities.'

Australia has thus far been one of only a few developed nations where political donations from foreign entities are legal. Entities to be impacted by the new electoral laws will include organizations spending over US$76,000 (AUD$100,000) over the last four years, with activist groups set to come under the same transparency regime as political parties.

The notion of foreign meddling has been particularly prominent in national media since the dramatic exposure of a prominent Labour Party MP's relationship to high-ranking Chinese businessmen. Sam Dastyari was revealed in September 2016 to have engaged in financial dealings with Chinese company Yuhu, which paid at least US$30,459 (AUD$40,000) of his lawyer's fees in a legal dispute with an advertising firm.

Albo defends Dastyari: "What an absolute beatup this is and of real concern is the apparent laissez faire attitude that the Government has towards using the security agencies to try to make a partisan political point. "I have no concern about Sam Dastyari's loyalty to Australia."

​It is suspected these payments may have related to his frequently expressed support for China's territorial claims in the South China Sea, a position contradicting that of his own party. He was also revealed to have advised a Chinese businessman with alleged government connections he may have been surveilled by Australian intelligence services.

​The issue of alleged Chinese interference in Australia's domestic politics has persisted for several years — the government has intervened on several occasions to prevent the sale of Northern Territory's Darwin Port as well as cattle-grazing land and parts of the country's power grid to Chinese companies.

The Attorney General George Brandis, speaking at the press conference, said the new legislation also "contemporizes" and expands the definitions of "treason" and "espionage" — the latter will now be defined as possessing or receiving information considered sensitive to national security, rather than simply transmitting it.

The newly invented offence of "unlawful interference" is defined as conduct harmful to the national interest, which is not currently covered by treason or espionage. It will be a crime to be engaged in "covert, deceptive or undisclosed conduct for the purposes of a foreign actor" aimed at influencing Australia's political process.

Among the groups singled out was grassroots activist movement "GetUp!" which has repeatedly campaigned against policies of the coalition government, including the opening of coal mines near the Great Barrier Reef, and the internment of asylum seekers on Manus Island in Papua New Guinea.

Turnbull's government has introduced a number of security and anti-terrorism related law changes particularly since the country's last federal election wiped out the Liberal Party's majority and left him more vulnerable to pressure from the right-wing of the party, unhappy at his September 2015 removal of his predecessor Tony Abbott, due to poor polling.