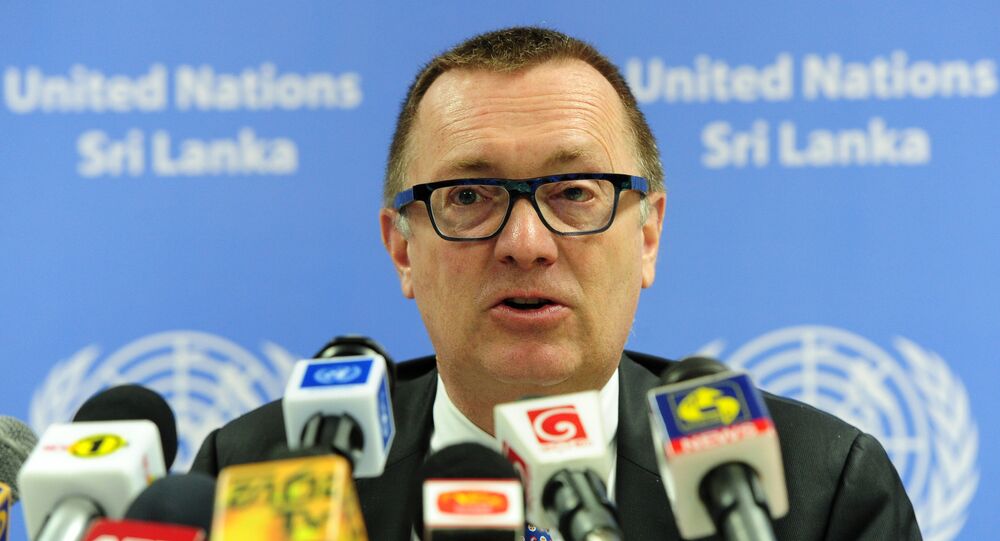 Dove of Peace: Senior UN Diplomat Makes a Rare Visit to N Korea Amid US Drills

The UN has dispatched one of its most influential officials to Pyongyang in an effort to de-escalate tensions on the Korean Peninsula.

United Nations Under-Secretary-General for Political Affairs Jeffrey Feltman has set out on his four-day official visit to North Korea.

Feltman, who heads the UN's Department of Political Affairs, was officially invited by the North Korean leadership in early September for a "policy dialogue."

However, the DPRK only confirmed the invitation last week, merely a day after its latest missile test, which it claims can reach the entire continental US.

A UN spokesman quoted by the BBC, said that Feltman will hold meetings with a number of senior North Korean officials, where they will discuss "issues of mutual interest and concern."

© REUTERS / Jonathan Ernst
EXCLUSIVE: West 'Overestimates' China's Influence Over North Korea
Before visiting North Korea, Feltman made a stop in China, the DPRK's historical ally, which sent a diplomat of its own last month for talks related to the recent missile and nuclear tests.

The UN's decision to dispatch Feltman, who is the highest-ranking UN official to visit the country for the past six years, reflects the organization's efforts to defuse the international crisis that may well lead to a nuclear war.

In September, UN Secretary-General Antonio Guterres offered to assume the role of a mediator in the crisis, calling upon world leaders to exercise restraint in order to avoid "nuclear peril."

"We must not sleepwalk our way into war," Guterres said during the annual summit of the UN General Assembly.

Feltman's profile, as a career American diplomat who worked some 26 years in the State Department before being offered his new position at the UN, also likely played a role in his visit, since the tension between the US and North Korea continues to escalate.

© AFP 2020 / JUNG YEON-JE
US Fighter Jets Arrive in South Korea for Joint Drills After Pyongyang's Missile Launch - Reports
Last week, US Ambassador to the United Nations Nikki Haley threatened that that the DPRK would be "destroyed" if the war was to break out.

This Monday, the American and South Korean military launched their largest joint aerial drills, featuring over 200 combat planes and thousands of soldiers.

North Korea branded the five-day exercises as a "provocation".