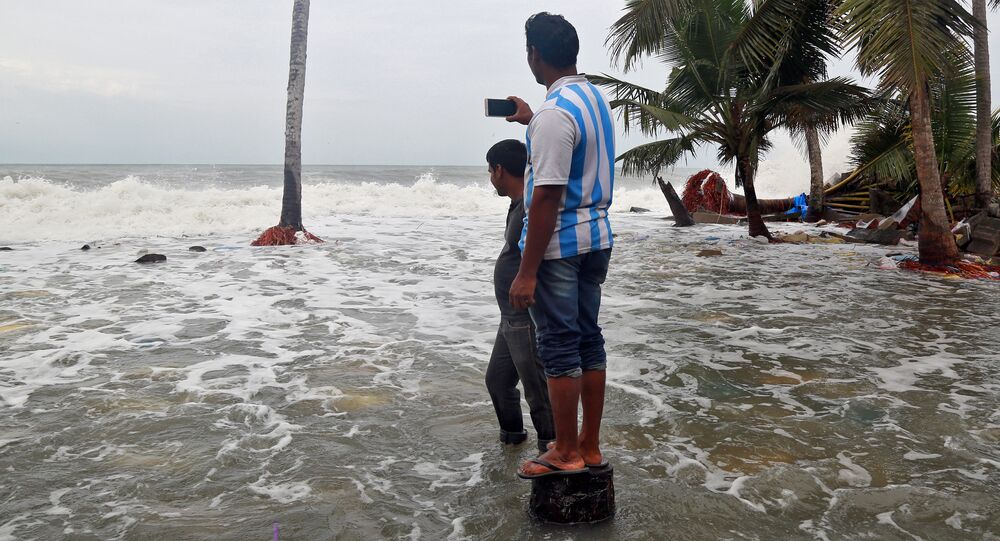 Cyclone Ockhi Approaches Western India after Killing 25 in the South

India’s western states of Maharashtra and Gujarat are bracing for cyclone Ockhi, which battered the southern coastal states over the weekend, unleashing death and destruction. Hundreds of fishermen are still missing.

New Delhi (Sputnik) — Cyclone Ockhi, which battered parts of southern India, killing at least 25 people, is heading towards the west of the country where it is expected to make a landfall in the next 24 hours, the Indian Meteorological Department (IMD) said on Monday.

© AFP 2021 / NOAH SEELAM
Some 90 Missing, at Least 9 Dead as Cyclone Ockhi Hits India - Reports (PHOTO)
The IMD said that the "very severe cyclonic storm" is presently centered over the east-central Arabian Sea, 670 kilometers southwest of Mumbai and 850 kilometers south-southwest of Gujarat. It is very likely to move north-northeastwards, weaken gradually and cross south Gujarat and the adjoining north Maharashtra coasts by midnight of December 5, 2017.

​The Indian Navy has pressed into action 10 ships, as well as eight aircraft, including the Boeing P8i patrol aircraft, for search and rescue operation, as hundreds of fishermen from the southern states of Tamil Nadu and Kerala have gone missing as the cyclone hovered near their coasts last weekend bringing high-speed winds and heavy rains. At least 600 fishermen have been rescued so far. The fishermen's families have launched a parallel rescue operation, as they claimed to know the sea better than anyone else.

© REUTERS / Stringer
Indian Armed Forces on Alert as Severe Cyclone Hits South India
Meanwhile, Defense Minister Nirmala Sitharaman said that the search operations would continue till the last of the missing fishermen are brought back. "I will not lose hope as the joint search operations have rescued fishermen who had ventured into the seas 15 days back," Nirmala Sitharaman told the media.
Apart from claiming at least 25 lives, trees and electricity poles were uprooted, roofs of houses and other structures were blown off and train and flight services were halted on Friday and Saturday as Ockhi with wind speeds between 155 and 165 km per hour struck the southern coastal state of Tamil Nadu, Kerala and the Lakshadweep archipelago in the Arabian Sea.
...
Reddit
Google+
Blogger
Pinterest
StumbleUpon
Telegram
WhatsApp
10