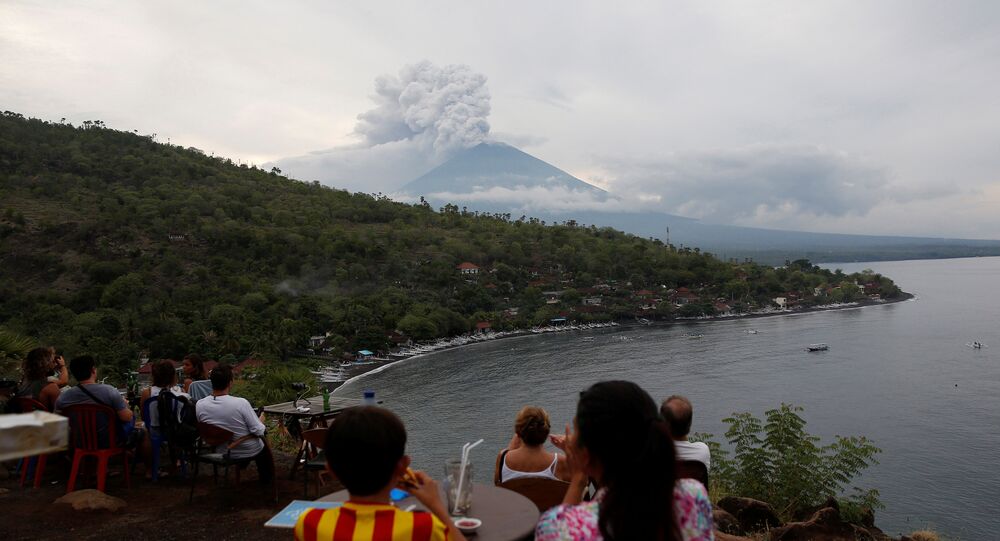 ‘My Animals Are My Assets’: Residents in Bali Defy Volcano Evacuation Order

Many people have been forced to leave their homes in the area surrounding Mount Agung, the largest mountain on the Indonesian island of Bali, due to fears over an ongoing volcanic eruption event.

Local resident Wayan Suta Negara and his family evacuated their homes and took shelter in a nearby shelter in the village of Manggis.

© REUTERS / Nyoman Budhiana
Once in a Life Time: Tourists Get Creative With Pics at Bali's Erupting Volcano (PHOTOS)

Every few days, Negara, defying orders from local police and administrators to stay away, returns to his village to feed his dogs and chickens and to pray for the safety of his home and the spirits of his ancestors.

"Every time I go home, I use the opportunity to pray at my house," he cited by the New York Times. "That is very important, so that our house is protected."

According to climate scientists, Mount Agung is so large that if it fully erupts, it would affect the atmosphere of the Earth. A massive release of smoke and ash could cool the planet and slow global warming by releasing enormous amounts of sulfur dioxide particles into the stratosphere, reflecting sunlight away from the surface.

When Mount Agung last erupted in 1963, over 1,000 people were killed. The government, in efforts to avoid a repeat of the tragedy, mandated that all residents with six miles of the volcano's summit must evacuate. Currently, over 55,000 people are said to have relocated to evacuation camps.

But some villagers, particularly those in Bhuana Giri, about 4.5 miles from the summit, are nonetheless returning to their homes and duties.

Kadek Sariyani, who owns a small shop in Bhuana Giri selling drinks and food, has seen her daily retail intake drop from about $20 a day to just seven dollars since the volcano began spewing smoke and causing an earthquake swarm in the region.

"I know this area is prone to disaster and according to the government we are not supposed to be here," she said. "But I need to feed to feed my pigs and chickens. I cannot leave them starving."

Wayan Sukarya, a resident of the town, returns every day even though he evacuated in September.

"My animals are my assets," he said, adding "that's why I have to take really good care of them. It is like I live here in the daytime, and go back to the camp when it is dark," cited by Nytimes.com.

Lt. Col. Benny Rahadian, commander of the Mount Agung disaster relief task force, sympathizes with residents that return to their homes despite the warnings.

"We can't say they could not go back to their village," he said. "We will warn them, persuade them."

Nengah Wadi has been living at the Pasar Seni camp in Manggis with eight other family members.

"It is a very difficult situation for everybody," she said. "But at the same time, we are thankful we have a roof to cover our heads and have food three times daily."

"It feels like being in a prison," she claimed, however.

"You can go anywhere you want actually, she added, "But at the same time, you keep worrying about your house, your animals and not knowing when you can return to your own home."

Once in a Life Time: Tourists Get Creative With Pics at Bali's Erupting Volcano