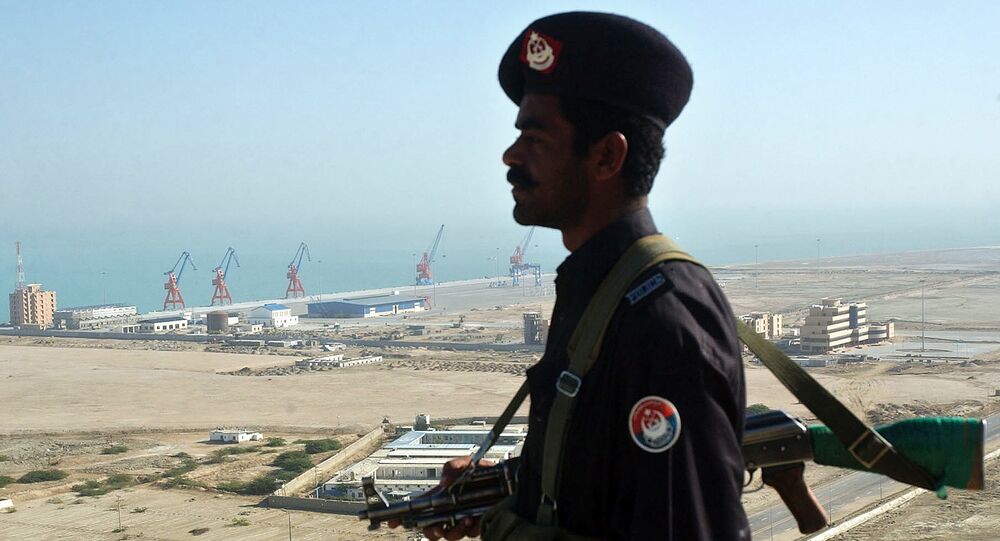 The planned deployment of Chinese warships at the Gwadar port in Pakistan threatens to make India’s worst fear come true. India suspects that China has been increasing its naval presence in the Indian Ocean region as part of a larger strategy to encircle India.

New Delhi (Sputnik) — The proposed deployment of Chinese warship at the Gwadar port in Pakistan has raised serious concerns in New Delhi. Addressing the Indian Navy's annual press conference, Naval Chief Admiral Sunil Lanba said that Gwadar was meant to be a commercial harbor and that if it is to be used by the Chinese PLA for defense purposes it would be a matter of grave concern for India.

"In future, if PLA Navy ships operate from Gwadar, it will be a matter of concern, we will have to think of ways to mitigate the challenge," Admiral Lanba said.

The Gwadar port, 400 nautical miles from India's western border of Gujarat, is being developed as part of the China-Pakistan Economic Corridor (CPEC).

China considers Gwadar a major commercial and strategic hub for it to mark its strong presence in the Indian Ocean region. But for India, it is a matter of concern, as the presence of Chinese naval vessels in the area would further confirm its suspicion of a Chinese plot to encircle India militarily.

Apart from Pakistan, India's other immediate neighbors, Bangladesh and Myanmar, have already acquired naval vessels from China. China has also supplied a variety of aircraft and patrol vessels to the Sri Lankan armed forces. Apart from the Chinese frigates and corvettes it currently possesses, Pakistan is in the process of acquiring eight submarines from China.

© AFP 2021 / TAUSEEF MUSTAFA
Indian Army Envisions Early Deployment of Ultra-Modern Tanks Along Chinese, Pakistani Border
As a countermeasure, India has deployed a large number of patrol vessels and submarines in the Indian Ocean region. "We are deployed 24x7 in key areas in the Gulf of Aden to the Strait of Malacca besides the straits of Sunda and Lumbok," Admiral Lanba claimed.

The Indian Navy chief also confirmed that at any given point in time, there are at least Chinese ships are present in the Indian Ocean region, which China claims are on an anti-piracy mission. "In the month of August, there was a unique situation, as there were 14 ships in the area," Admiral Lanba added.

As part of its massive strategy to counter China, the Indian Navy plans to deploy another 34 naval ships in the area in the coming few years. The ships are currently under construction at different Indian shipyards. However, the speed with which China has been adding to its naval assets in the region has dwarfed India's efforts.