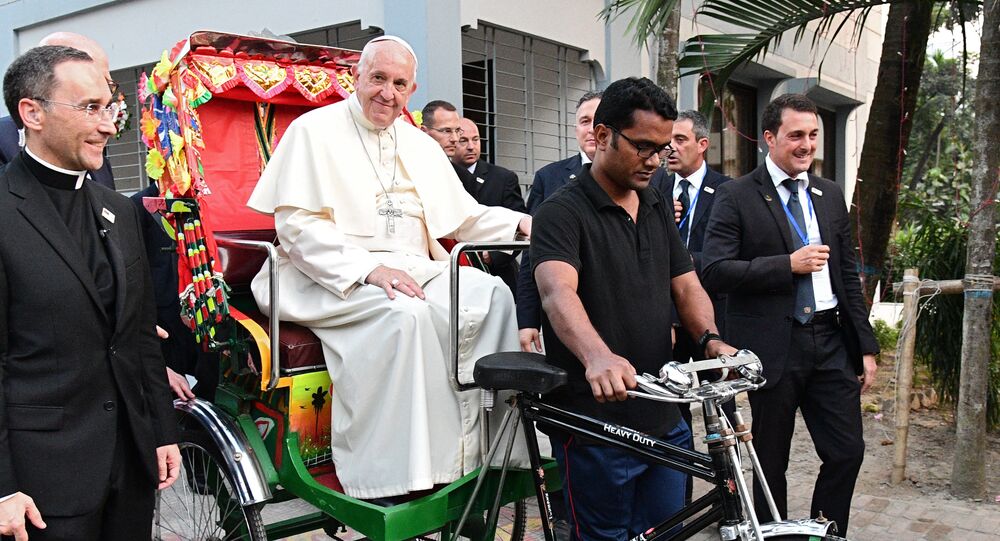 Despite addressing the crisis in Myanmar, the Pope has previously abstained from using the word "Rohingya," the country's Muslim minority group.

Pope Francis has for the first time mentioned "Rohingya" during his current Asia trip, saying, "The presence of God today is also called Rohingya," after a meeting with 16 refugees who were brought to Dhaka from camps in Bangladesh region bordering Myanmar.

The Pope has greeted and blessed Myanmar's Muslim minority refugees from the Rakhine state at an interfaith peace prayer in the capital of Bangladesh of Dhaka.

Despite the Pope visiting Myanmar during his trip, he has previously abstained from using the word "Rohingya" when addressing the crisis in the country, which forced over 600,000 Rohingya people to flee to neighboring Bangladesh.

Speaking in Myanmar's capital, the Pontiff said that that Myanmar is being damaged by a civil conflict and hostilities "that have lasted all too long and created deep divisions," adding that instead of being "a source of division and distrust," religious differences should become "a force for unity, forgiveness, tolerance and wise nationbuilding."

Ahead of the Pope's visit to Asia, Myanmar and Bagladesh have recently signed a repatriation agreement on the return of hundreds of thousands of Rohingya Muslims who fled the Rakhine state into Bangladesh, with the UNHCR assisting the countries.

On November 7, the UN Security Council issued a presidential statement expressing serious concern over human rights violations in Myanmar and deteriorating humanitarian situation in Rakhine state that could potentially further destabilize the situation in the region.