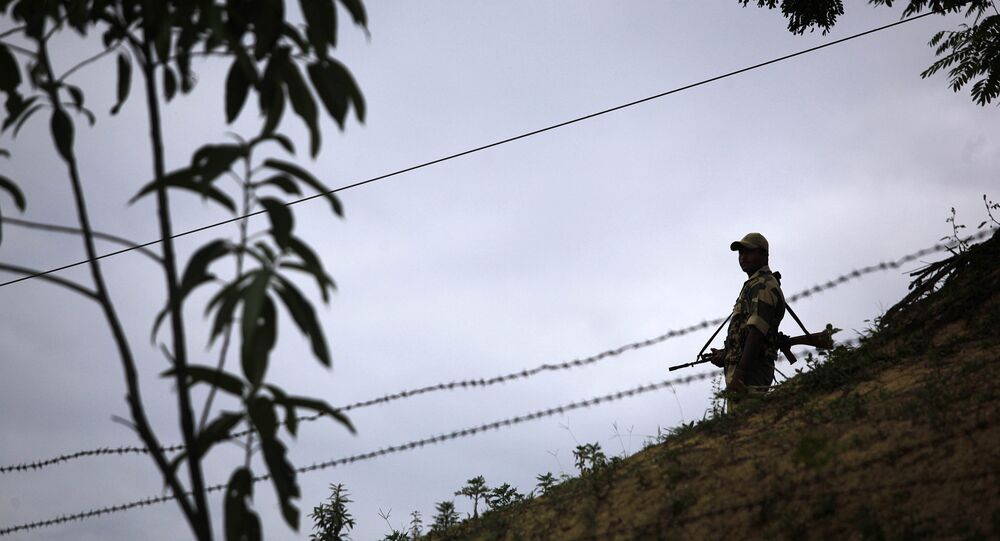 At least five battalions (1200 troops per battalion) of India’s Border Security Force (BSF) will be raised to police the border with Bangladesh. The BSF claims to have apprehended 87 Rohingyas up to 31 October this year, out of which 76 were sent back to Bangladesh.

New Delhi (Sputnik) — India plans to deploy an additional 6000 border security guards along the porous border with Bangladesh to curb the influx of Rohingya Muslims.

© REUTERS / Soe Zeya Tun
Say No Evil: Pope Fails to Mention Rohingya in Myanmar's First-Ever Papal Mass
India has adopted the approach of pushing back the illegal immigrants instead of arresting them.

“The Rohingya issue is a complicated one. Our policy is to push them back and not arrest them. If we arrest anyone trying to infiltrate into India, then they become a liability and then there has to be a process of identifying them. So we just push them back,” KK Sharma, Director General, BSF said at a press conference in New Delhi.

India has been extra cautious of the possible spillover of the estimated one million Rohingyas who have currently taken refuge in Bangladesh after fleeing persecution in Myanmar.

The unavailability of basic amenities in the refugee camps at Bangladesh’s Cox Bazaar is considered the main reason behind the Rohingyas trying to infiltrate into the Indian territory. The Indian states of Jammu & Kashmir, Tamil Nadu and West Bengal have witnessed a huge influx of Rohingya Muslims in recent times.

The BSF has also been battling agents who facilitate the entry of Rohingyas inside India in lieu of money.

"Agents facilitate their cross-border movement and ensure safe arrival at their destination in lieu of some financial amount. Most of the Rohingyas go to Jammu because some Rohingyas have already been staying there for the last few years," the BSF said in a statement.

According to official estimates, there are currently around 40,000 Rohingya Muslims in India. The Indian Government plans to deport them to Myanmar but the final action is pending approval by the country’s top court which is hearing a petition filed against the move.

India Speeds Up Construction of Mountain Passes Near Chinese Border