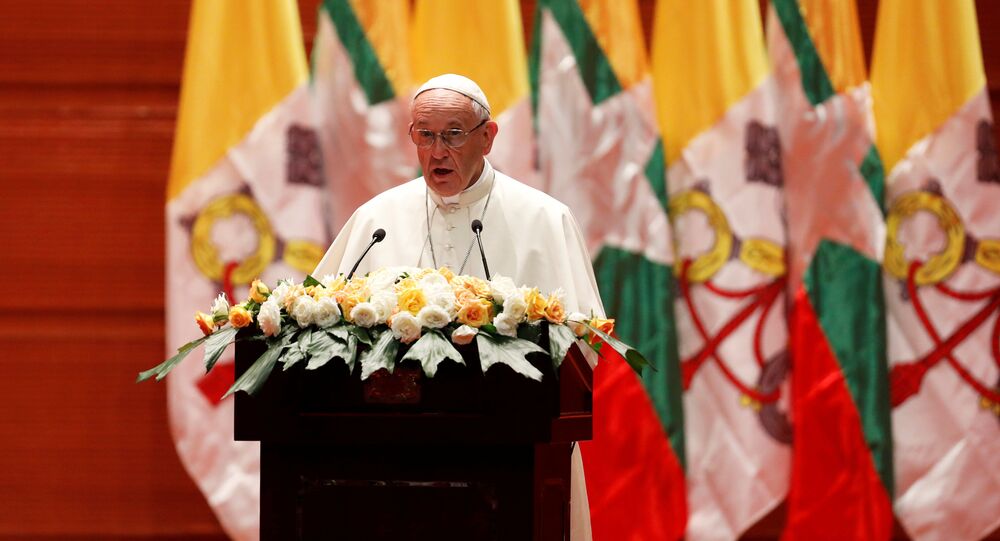 During his three-day visit to the conflict-ravaged Southeast Asian nation, His Holiness Pope Francis held a historic mass, where he urged reconciliation, while conspicuously omitting any reference to the plight of over 650,000 Rohingya Muslims who are caught in what top diplomats are calling a "major humanitarian crisis."

Preaching to some 150,000 Catholics in Yangon's Kyaikkasan Ground Park, Pope Francis underscored that the Christian way is to respond to hatred and violence with "forgiveness and compassion."

© REUTERS / Soe Zeya Tun
Pope’s Emphasis on Religious Harmony a Strong Message to Myanmar
The sermon, which was given as part of the first ever Papal visit to Myanmar, sought to address the brutal violence that has rocked the nation for the past year, while evading controversy by expressly calling out the country's security forces for their military operation in Rakhine State on the country's west coast.

"I know that many in Myanmar bear the wounds of violence, wounds both visible and invisible," the Pope declared.

"We think that healing can come from anger and revenge. Yet the way of revenge is not the way of Jesus."

"Many of you have come from far and remote mountainous areas, some even on foot," the Pope said.

"I have come as a fellow pilgrim to listen and to learn from you, as well as to offer you some words of hope and consolation".

Symbolically, the sermon was held in Yangton, Myanmar's largest city, which was formerly known as Rangoon, literally "the End of Strife."

Myanmar is a predominantly Buddhist country, where only about 660,000 of the nation's 52 million people identify as Catholic.

© AP Photo / Dar Yasin
HRW Accuses Myanmar's Soldiers of Systematically Raping Rohingya Women
The country has been plagued by brutal violence in the northern part of Rakhine State, where the predominantly Muslim Rohingya population has been targeted by the Myanmar security forces in retaliation for the Rohingya insurgents' attacks on the military facilities in the region.

The conflict, which has already taken lives of over 2,000 people and displaced about 650,000 others, has caused an outrage in the international community.

Last week, US Secretary of State Rex Tillerson stated that "it is clear that the situation in northern Rakhine state constitutes ethnic cleansing against the Rohingya."

A number of international human rights NGOs, including Amnesty International, branded the Myanmar government as "apartheid."

As part of his official visit, the Pope met with the embattled Myanmar leader, Aung San Suu Kyi, who has been pressured to voice her opposition to the largely autonomous Myanmar military's actions.

During the press conference this Tuesday, the Pope stated that rights of all Myanmar people- "none excluded"- should respected, yet he avoided to refer to the Rohingya by name, disappointing many human rights activists.

However, the pontiff's next stop after Myanmar is Bangladesh, the main destination for the Rohingya fleeing the conflict, where the Pope is expected to meet some refugees from Rakhine State.

Pope Francis Didn't use the term #Rohingya in his speech to Myanmar's leadership. He is the holiest man in the world but it's #So_Sad to see that even the holiest man cannot call our identity.#rohingyaMassacre#BudhTerrorism#RohingyaGenocide@ela_mishra
https://t.co/Qe3CmxIQ1t pic.twitter.com/LpxWXpD0DO

Pathetic: Pope Francis in Myanmar failed to mention the Rohingya. The military is committing ethnic cleansing against a people, and he won't even name those people. https://t.co/f5YTmDt76l pic.twitter.com/47BNCos7nM

APOSTOLIC VISIT OF HIS HOLINESS POPE FRANCIS TO MYANMAR & didn’t use disputed words #Rohingya during the speech @bbcburmese is not happy totally. https://t.co/gw7iuidCRM pic.twitter.com/Yxq4LB7XtA

While we focus on whether Pope Francis says or does not say Rohingya, worth noting that Rohingya need concrete help and aid and assistance, not just symbolic statements.