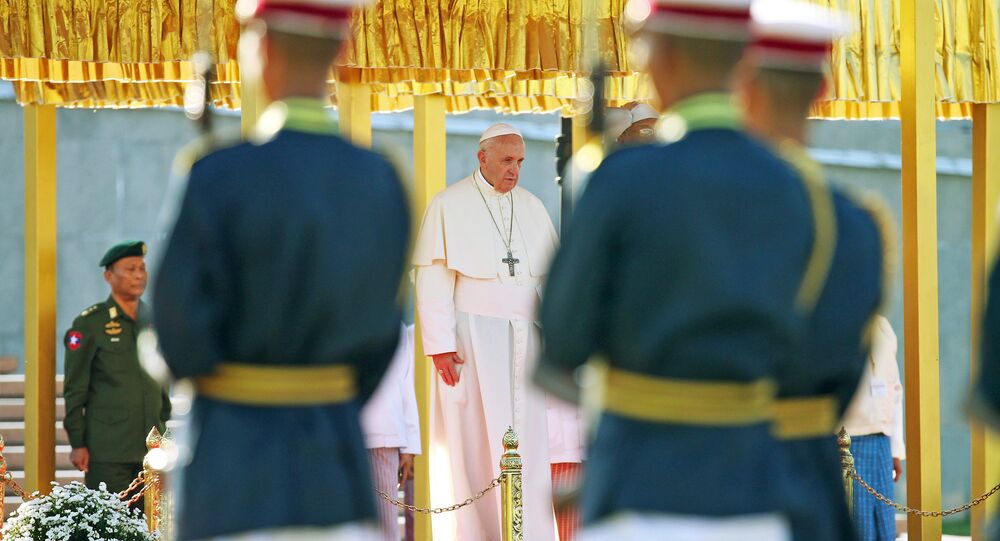 The Pontiff, who arrived in Myanmar on Monday to hold private talks with Myanmar army chief Min Aung Hlaing amid the brutality of the ongoing clampdown of the country's military on the Rohignya people, wasn't very specific when he called for an end to the violence.

Reuters quoted Pope Francis as saying on Tuesday that Myanmar is being damaged by a civil conflict and hostilities "that have lasted all too long and created deep divisions."  At the same time, he did not mention Rohingya Muslims in his speech in Myanmar's capital.

"The arduous process of peacebuilding and national reconciliation can only advance through a commitment to justice and respect for human rights," the Pontiff said.

Instead of being "a source of division and distrust," religious differences should become "a force for unity, forgiveness, tolerance and wise nationbuilding," according to him.

Speaking to reporters earlier this week, Pope Francis expressed hope that his visit to Myanmar will "at least be fruitful" even though "they say it's too hot" there.

During the second leg of his trip, the Pontiff is expected to meet a group of Rohingya refugees in Dhaka, the capital of Bangladesh.

In late August, Myanmar's government cracked down on Muslim insurgents of Rohingya origin who launched a series of attacks on the country's police posts.

The military launched an operation in the villages of Rakhine State, which forced more than 600,000 Rohingya people to flee to neighboring Bangladesh.

Pope’s Visit Brings to Fore Concerns of Christians in Myanmar