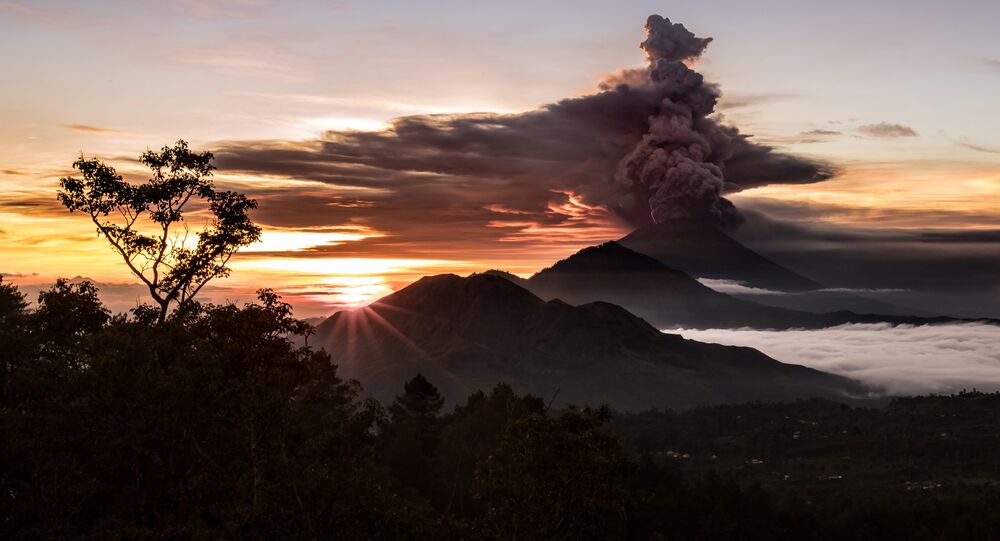 Indonesia’s Mount Agung volcano on the island of Bali erupted for the second time in less than a week on Saturday evening, emitting a thick plume of ash and smoke more than 1,500 m (4,921 ft) into the sky, forcing Airlines have been forced to change their flight plans media reports said.

Airlines have been issued a “red warning” about the danger of volcanic ash choking and shutting down plane engines as another eruption looks imminent.

© AP Photo / Firdia Lisnawati
Freeze! Bali Volcanic Eruption Could Chill Globe for Years
After Saturday’s eruption, which produced a bigger ash cloud than the initial one on Tuesday, Singapore updated its travel advisory for the island, warning that ash clouds could “severely disrupt air travel.”

Meanwhile, Indonesia’s Disaster Mitigation Agency said that “tourism in Bali is still safe, except in the danger (zone) around Mount Agung," referring to an area that extends to a radius of up to 7.5 km (4.7 miles) from the summit, the BBC reported.

According to media reports, an estimated 25,000 people still live in temporary shelters after increased volcanic activity prompted fears of a major eruption forcing 140,000 local residents to flee the area.

The Mt. Agung volcano, which towers over eastern Bali at a height of just over 3,000 meters (9,800 feet), is about 70 kilometers (43 miles) from the island’s main tourist areas of Kuta and Seminyak.

During its last eruption in 1963 it left more than 1,000 people dead and destroyed several villages.

Many of Indonesia’s 130 volcanoes show high levels of activity.