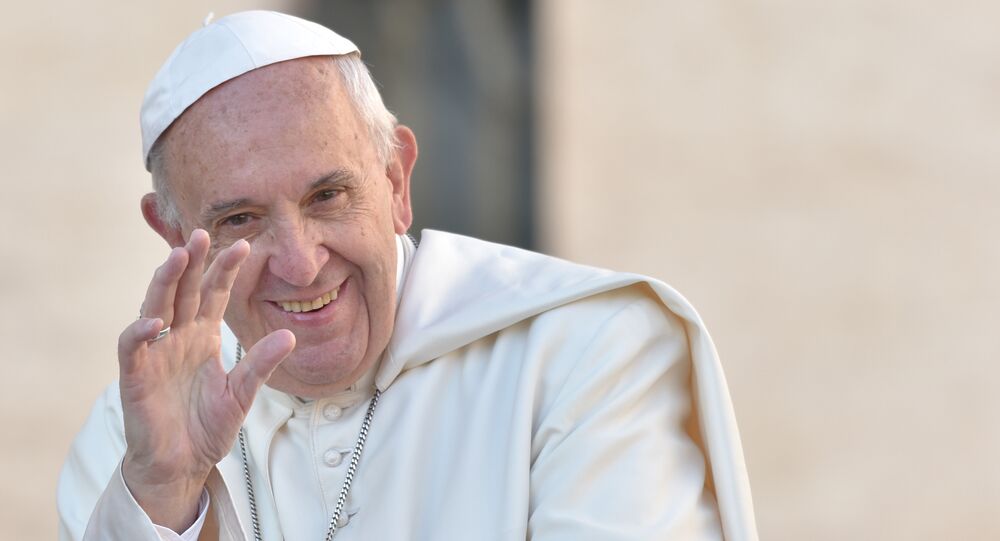 Pope Francis’ upcoming visit to Myanmar has gathered mixed reactions with some analysts viewing it as a risky affair as his compassion towards the Rohingya Muslims could unsettle the recently established ties between the Vatican and Myanmar, which has been accused of committing “apartheid” by human rights bodies.

New Delhi (Sputnik) — The head of the Catholic church and one of the most influential religious figures in the world, Pope Francis is visiting Myanmar at a time when Amnesty International has declared the treatment of Rohingya minorities in Myanmar as "apartheid" and Washington has already said that the situation in Myanmar is akin to "ethnic cleansing" of the Muslim Rohingya people.

The Pope will also visit Bangladesh where at least 600,000 Rohingyas have taken refuge after fleeing Myanmar. The Pope's seven-day visit to the two countries begins Monday.

Observers are keenly watching how the Supreme head of the Catholic Church will be welcomed in Myanmar —a country with a Buddhist majority and only about 700,000 Roman Catholics. The Pope is scheduled to hold a private meeting with the Chief of the Myanmar army Senior General Min Aung Hlaing and a separate meeting with civilian leader Aung San Suu Kyi.

In a video message sent to Myanmar last week, the Pope had said he aimed to spread the message of "reconciliation, forgiveness, and peace."

© REUTERS / Hannah McKay
Myanmar, Bangladesh Sign Repatriation Agreement on Rohingya Refugees - Official
However, some analysts are of the opinion that it would be extremely difficult for the Pope to balance his role as the Vatican's head of state which established diplomatic ties with Myanmar only recently while also exhibiting compassion toward the Rohingya Muslims who are seen by Myanmar as illegal militant settlers.

"He risks either compromising his moral authority or putting in danger the Christians of that country," said Father Thomas Reese, a prominent American author, an analyst writing for the Religion News Service.

"I have great admiration for the Pope and his abilities, but someone should have talked him out of making this trip," he wrote.

Meanwhile, the Catholic Church's headquarters in India have expressed hope that the Pope's visit would prove to be a step forward in brokering the peace process.

"Holy Father (Pope Francis) is a man of compassion and mercy reflecting the love and grace of Jesus Christ. He has special concern and love for refugees. He expressed it in clear words during the west Asian refugee crisis as well. His visit to Myanmar and Bangladesh will have a healing touch for all those who are suffering. During his visit he will express his solidarity with all those people who are isolated, segregated and depressed in one or the other way," Spokesperson of the Catholic Bishop Conference of India (CBCI) Father Joseph Chinnayan told Sputnik.

CBCI office was cautious about revealing the meeting itinerary of the Pope.

"It is a personal visit of the Pope and no church delegation is accompanying him. He is a country head. He is the head of state of the Vatican and he will be welcomed with all honors due a state head. And he will meet people in his capacity as the head of a country visiting another country," Fr. Joseph Chinnayan added.