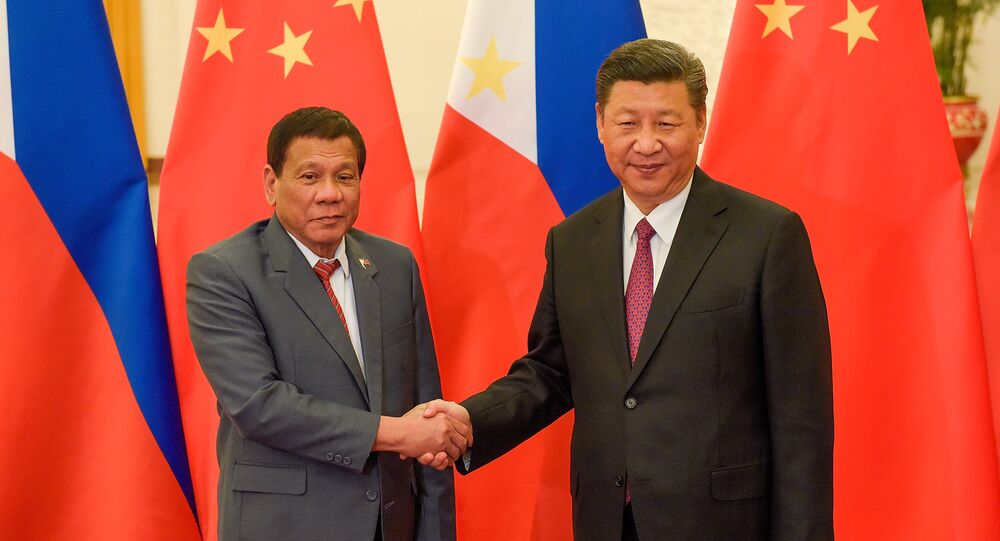 To mark their improving relations China and The Philippines have inked a series of agreements strengthening diplomatic and economic ties - including one to avoid any military conflict in the disputed South China Sea, once a flashpoint between the two nations.

The two men shook hands and issued a joint statement that both nations should focus on resolving their territorial conflicts in the South China Sea by dialogue, not force. "Both sides believe that the maritime dispute is not the full sum of the China-Philippines relationship," the statement said. "Both sides also reaffirm the importance of maintaining and promoting regional peace and stability, freedom of navigation in and over-flight above the South China Sea as well as freedom of commerce and other peaceful uses."

Both sides agreed to work harder "to manage and prevent incidents at sea, enhance maritime dialogue and cooperation, and pursue a stable growth of bilateral relations. Both sides agree to strengthen maritime cooperation in areas such as marine environmental protection, disaster risk reduction, including possible cooperation in marine scientific research, subject to further consultations."

Duterte issued a statement of his own, discussing the "improving relations between ASEAN and China" when it came to issues in the South China Sea. "In view of this positive momentum, we looked forward to the announcement of the start of substantive negotiations on the Code of Conduct (COC) with China," Duterte said, hopefully sometime in 2018.

The "Code of Conduct" is meant to be a comprehensive set of rules dictating how vessels are to behave in the disputed waters to avoid inflaming international tensions. In his statement, Duterte claimed that he had successfully tested a hotline between the Chinese and Philippine foreign ministries in case of maritime emergency.

"In our view, these are practical measures that could reduce tensions and the risks of accidents, misunderstandings and miscalculation," he said.

Beijing also opened their deep pockets to put their money where their mouth is: 14 economic deals were inked, most of them related to the construction of public works such as bridges, dams, and irrigation projects in The Philippines. China also granted over $22 million to Manila to rebuild the city of Marawi, the site of five months of brutal fighting between the Philippine military and Daesh-affiliated militants.

While China and The Philippines have never been outright enemies, they have often clashed over disputed territories in the South China Sea, mostly around the Spratly Island chain. Beijing considers the whole of the South China Sea their sovereign territory. To enforce their claim, they have undertaken massive artificial island construction initiatives since 2015.

This has led them into territorial disputes with The Philippines and many other nations, including Brunei, Indonesia, Malaysia, Vietnam, and Taiwan — all of whom save the last are also ASEAN members. In 2012, the navies of China and The Philippines stood off in the Scarborough Shoal, leading to the Permanent Court of Arbitration (PCA) to hear the case over the territorial dispute.

The PCA ruled that the Chinese claim to the territory was illegitimate, which did little to dissuade Beijing from continuing construction of artificial islands in the Spratlys. Between then and now, Xi became President of China and Duterte President of The Philippines. Relations have steadily improved since then.

A September 2017 Pew Research Group poll found that 55 percent of Filipinos had a favorable view of China — up from 38 percent in 2014. The same poll marked a significant decline in the opinion that Manila should be tough on China in territorial disputes and an uptick in those who support a strong economic relationship between the two Asian nations.